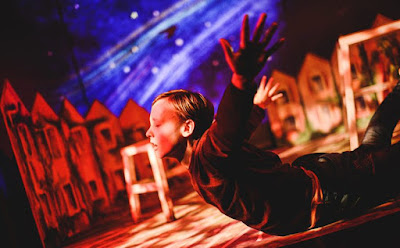 Presented as part of Waterside's Refract Festival. this was Tessa Bide's one hour adaptation of the children's book 'Perfect' by Nicola Davies and Cathy Fisher.

The performance took place in the Chambers, an upstairs wood-panelled room which had been set out for this particular production with a double row of seats in a semi-circle and a small performance area in front with a large projection screen behind this. The setting was intimate and inviting.

I was not at all familiar with the storyline, and so was quite surprised that for a children's show, so much technical ornithological information concerning swifts was imparted. I found that very interesting, and as it was indeed central to understanding the main character was also perhaps necessary.  Two actresses performed this story, and despite it being very gently-flowing and un-rushed; with very long gaps between sparse and minimal duologue or narrative where music is played or minimalist movement performed, they still managed to keep the 8 young children in this afternoon's audience quiet. That in itself is a mini-miracle these days. I could see that their attention span was waning in these longer gaps, but happily they came back to the story again when the story started again.

Eline Hallam plays the boy - although her youthful androgynous looks made me think that she was a tomboy for majority of the performance until she actually told us she was male. Tessa Bide played the mother. It is a story of innocence and growing up. A young boy living out in the countryside is fixated with swifts and dreams of flying away with them. His mother becomes pregnant and eventually he has a wee baby sister, and it shows how he finds love and understanding and meaning for the world around him and for his new arrival through his love of swifts.

It's quite a nice but uneventful and unexceptional story, and the whole hour continues at a very slow, Sunday meander. The screen behind showing animated footage complementing the narrative, in the style, we are told, of the drawings which accompany the original book.

The audience participation part of the play was somewhat eggy, and had it not been for a rather talkative grandma, it would not have happened at all. The swifts flying across the countryside paper puppets on strong wires manipulated by Bide, who, not judging the size of the performance space correctly managed to hit me straight in the face with one of them. Lucky I wasn't a child.  And the poor swift which is brought in damaged and cared for by the boy looked much more like a model of a humped-back whale, and indeed I thought it was until it became obvious they were trying to show us a poorly swift!

All in all, the show was OK. Absolutely nothing exceptional and something that those 8 children {possibly 5 or 6 years old} will instantly forget the moment they walk out of the door. But it proved to be a harmless diversion for a very hot and sultry afternoon.