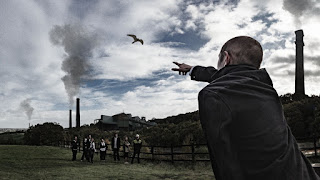 Wakefield local amateur dramatics group “In On The Act”, (the Theatre Royal Wakefield’s Young Company for aspiring theatre-makers aged 18-30), present the Barry Hine’s classic tale of “Kes” (adapted as a film in 1969 from the 1968 book entitled “A Kestral for a Knave”) for just three performances, commencing Friday 13th July for an evening performance, plus a Saturday matinee and evening performance.

Fifteen year old Billy Casper (or “Casper” as he is more commonly referred to as), has very little going for him, he’s trapped in a mundane life of poverty, so poor that he has to share a bed with his older half-brother Jud, his dad is no longer on the scene and he finds school life challenging, often receiving the cane for dozing off in class. However, life is about to start looking less bleak for Casper, the day he finds himself at a local farm where he is soon peering into the nest of some young kestrels, deciding to steal one from the nest to keep in his shed at home.  Unable to get a parent to sign a library application form, Casper instead decides to steal a book on kestrels and is soon engrossed, teaching himself to hand-rear the bird whom he lovingly calls “Kes”.  However when Casper makes a bad decision, the results are devastating.

Although the movie is set in the 1960’s, when the book and film were both produced, this company have opted to set the story in the early 1980s, with an explanation behind this within their introduction in the shows programme.  However, other than the use of early 80s pop songs in various scenes, there wasn’t anything significantly different about this production which remained in line with the film, other than a larger number of female cast members, from school students - including McDowell being played by a female cast member and Caspers’ school teacher also being female in this production.

The stage set for this production, particularly the two large scraps of lined paper (in what appeared to be in the shape of  clouds) used against the simple black backdrop to form video screens which set the various different scenes, from the tops of houses and the Yorkshire coal mines to the classroom's blackboard and the surrounding countryside, along with the large black-painted wooden blocks which formed everything from a wall-papered living room to a brick wall all worked effectively in fitting with the story's settings.  It was simple yet highly effective, with the title character Kes working beautifully also in bringing the kestrel to life in a realistic yet artistic way.

The lead role of Billy “Casper”  played by Jamie Brooks, despite looking slightly too old for the role of a fifteen year old school boy in my honest opinion, captured the cheeky yet lovable character portrayed in Hine’s classic novel, beautifully.  Watching Brooks transform from the non-engaging boy in class come to life as he talks to his teacher Miss Farthing (Emma Vincent) about Kes was a highlight of this production.

Other notable performances came from a hearing impaired “student” who sadly I cannot put a name to (I would have loved to have had headshots in the programme to help place/remember cast members!) who not only was a pleasure to watch because of the passion she put into her performance and facial expressions she put into her character making me compelled to focusing solely on her at times, but also because it is very rare I attend a production and see a disabled cast member on stage, and as a disabled person myself with a passion for theatre and performance, this struck a chord with me.  Performance-wise the real show-stealer however was “Gryce Pudding” aka Mr. Gryce (Gareth Lewis) who nailed the strict Headteacher perfectly but also brought humour to the role.

Apart from a few issues with sound, particularly at the beginning of the show when the talking was difficult to hear over the music, the production was gripping and compelling to watch from start to finish, far more enjoyable than having to read the book as part of the GCSE curriculum in the mid 1990s as I had to, that’s for sure!  If only 'In On The Act' had presented this production to the fifteen year old me in the 90’s I might have enjoyed the story more.  This evening I went in not particularly understanding all the hype surrounding Kes, so I took along my dad, a Barnsley-born and bred (and proud!) man who grew up in the late 60s/early 70s and who raves about the film version (which was filmed in Barnsley) to finally being able to see why Kes is still as relevant today as it was over 40 years' ago.

I look forward to seeing future productions from In On The Act.