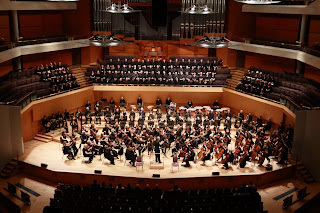 If I were only able to use one word to sum-up this evening's concert, it would be 'Wow!"

Normally, when reviewing students' performances some little leeway and consideration for their tender years and lack of experience is necessary. Not here!  And when the oldest musician could only be 18, the maturity, level of understanding of the pieces' requirements, and their individual and cumulative musicianship was beyond reproach.

Playing in the famed and hallowed space that is the acoustically perfect Bridgewater Hall, Manchester's classical music jewel, as well as having a chorus of over 140 singers and a mezzo-soprano soloist to contend with, this must have been both simultaneously a daunting but thrilling adrenaline rush  But to watch them as they played these two substantial works one could be forgiven for thinking that they were used to doing just this and taking everything so very much in their stride.

Before I comment on the music however, I want to make a special commendation to the conductor this evening, Jac Van Steen. He obviously has extensive experience of working with orchestras-in-training so to speak, as he knew exactly and precisely how to draw the absolute best from every section, every instrument with just the simplest of gesture, and the musicians responded with alacrity.
His control over such a large group of people was superb, bringing the choir in and out and controlling every instrument with aplomb, almost as though he were the music itself.  Conducting at its finest.

In the first half of this evening's concert, we heard one of Edward Elgar's more seldom performed large orchestral works, but a work of exquisite beauty with his signature all over it. I write of his 'The Music Makers' . But as great as this work is, it is also something of an enigma (excuse the Enigma Variations pun here please!) inasmuch as it is his only work to use such a configuration of female soloist, choir and orchestra; his only work to reference so many of his other tunes, and his only work to truly show Edward Elgar the man. What do I mean by this statement? In utilising Arthur O'Shaughnessy's poem 'The Music Makers' - a poem which can only be read by the reader wearing his heart on his sleeve, Elgar sets his own emotively powerful music giving away more of himself in this work than perhaps in any other. And as the movement dies away with a plaintive but soulless recurrence of the opening theme...'we are the music makers and we are the dreamers of dreams' he shows us a man (himself) who knows despair, pain, and death. It is not the happy jingoistic ending that perhaps it would have been if composed by someone else.

As I have already mentioned the orchestra were flawless in their interpretation and playing of this piece, and the chorus of singers... comprised of both  The Chetham's Chorus and The St. George's Singers, were superb and their diction immaculate.

The mezzo-soprano soloist, who doesn't start to sing until half-way through and then there is seemingly no stopping her, was this evening Margaret McDonald. A rich, mellow tone and perfect pitch with dynamic contrasts made this interpretation, and she was very pleasing on the ear. Sadly this evening though it was her diction which failed. Both myself and my companion remarked at how hard it was to understand her poor enunciation.

After the interval and the choir had gone. Just the orchestra now to delight us with the extended version of Gustav Holst's suite, The Planets.

15 years after Holst completed his Planets suit, another planet, Pluto, was discovered [never mind that the scientists are still debating exactly what a planet is and whether or not Pluto counts as one], and so some 70 years later, the final movement of Holst's work was extended with the addition of a new 'movement' - 'Pluto', which was composed by Colin Matthews in the style of and in deference to Holst, even bringing back the wordless offstage female chorus Holst scored for his Neptune.

Once again the orchestra were flawless and jaw-droppingly good. Again the orchestra demonstrated a knowledge and feel for this piece which took my breath away. These are, I would have thought, majority final year students, and so this concert will have been their swansong with Chetham's. I can honestly see no reason at all why every single musician this evening shouldn't be able to go into further training or find work within the profession without any difficulty, and I wholeheartedly wish them all every success in their so doing.

Meanwhile I look forward to hearing (and seeing) what joys await me with the newer students at Chetham's come September.