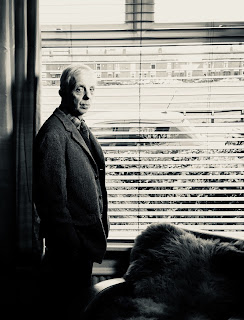 Jimmie Chinn's 'A Different Way Home' is less of a play and more of two inter-connecting monologues; and although both monologues can be performed separately, it is only when they are shown back-to-back do we fully understand them.

1974 Productions chose this out-of-the-way but lovely little venue (usually the preserve of the local Amateur Dramatic society) in which to perform this, their first G M Fringe production. Fitting perhaps since Chinn himself spent his formative years growing up in near-by Oldham.

In the first half we hear from Leslie. He has lived with his mother all his life, and here he tells us his side of the events leading up to her death. The extent of his loss, and his bitterness towards his sister, are reeled out in acerbic vitriol. Even before we met Maureen I had already formed a negative opinion of her! In the second act it is the turn of Maureen, the sister, to tell us her version of events. She felt rejected by her family and friends for her choice of marital partner and betrayed for not being asked for help when it was so obviously needed. But the feelings I had for her in the first half were turned on their head completely as we see and hear her perspectives. The gritty Northern speech and humour are pertinent to the play's success, and are treated reverently here; and despite the subject matter being serious and morose - the humour and the superb acting make this a truly wonderful gem.

It is a deeply moving and heart-wrenching portrayal of rival siblings and their perhaps irrational but nevertheless real likes and dislikes of each other and their lot in life. Together these two 'voices' convey the need for families to communicate and for love to transcend prejudice.

What was quite startling for me was that the same actor played both siblings. I wasn't expecting that. And so we were treated to the superb craft of Darren Scott playing both brother and sister, which made for a very interesting casting choice. Obviously physically they looked like siblings! but Scott's undeniable skill made the two characters quite different and never did the second descend into conventional 'drag', thankfully. Scott is a wonderful and natural actor who showed a deep understanding of his cleverly nuanced dual roles and kept the audience completely captivated the whole time.

Directed by James Schofield, this was heavy-going and serious subject-matter treated with a magic wand wave which resulted in one of the most thought-provoking pieces of theatre I have seen in a long while.