A Showcase Of Dance - The Dancehouse Theatre, Manchester 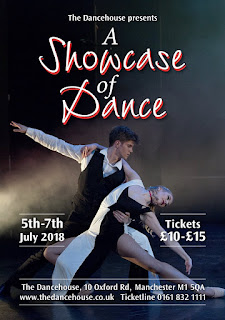 The Northern Ballet School is an internationally acclaimed training centre for ballet hidden away inconspicuously in a building on Oxford Road that doesn't look very much like a theatre - except for the frontispiece in fact, it would be just like any other anonymous building along that road, perhaps belonging to the university. Go inside however, and the building not only houses this school - a powerhouse of young talent - but there is also a beautiful art-deco theatre which is used by the school and visiting companies alike.

This evening the NBS presented a showcase of their year's work. Most of the items in the show this evening I had seen before (although I think I am right in saying that one or two had altered slightly since last time round), but there were definitely a couple at least that were new to me too, so that in itself was a pleasant surprise.

Somehow though, it never really matters whether you are watching these routines for the first or the umpteenth time, since the skill, energy, enthusiasm, commitment, talent, etc never ceases to amaze. For some of these students, it may well be farewell to the NBS as it marks the end of their years training there, but there is no doubt in my mind that every single one of them will find either further training opportunities or professional contracts without too much difficulty.

This evening there was a lovely mix of dancing styles. Not only did we have some very traditional classical ballet pieces, and some more modern contemporary ballet numbers, but we also had a lot of dances from the Musical Theatre repertoires of Lloyd-Webber's Song And Dance and Andersson, Ulvaeus and Rice's Chess, AND pop choreography from the likes of Nirvana, Paula Abdul and Prince! A complete pot-pourri of music tastes!

The set simple; a large dancing area with a few steps and platform behind, with a large screen behind that projecting pertinent and topical images for some of the numbers. This was completely sufficient and worked excellently. I liked all of the images created on the screen - especially the Chess sequence. The costumes were all excellent, once again superbly chosen and fitting for each routine - and there were some very quick changes too! The lighting creative but not over-fussy, leaving it very much a show highlighting the dancers not the skill of the technical crew - well done.

Furthermore, this showcase wasn't exclusively dancing either. The Northern Ballet School has an offshoot school (there is a huge crossover and sharing of students) which trains the students in Musical Theatre and jazz dance styles as well as giving acting and singing classes too. This is Jazzgalore - and it was students on this course who sang and acted their way through the aforementioned Song And Dance, Chess, and pop stuff.  And even having seen these sequences before and knowing what to expect, they still took my breath away - and Purple Rain still continues to be my favourite.

And so with the the whole evening starting with an Unexpected Song, which by the end of the showcase was certainly Coming Alive, we were treated to a spectacular 115-minute [just the right length!] theatrical event which proves beyond doubt The NBS a certainly a force to be reckoned with!