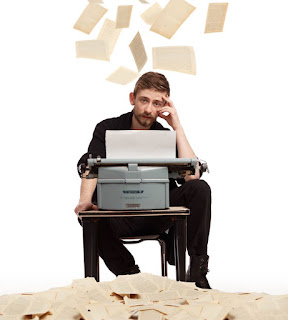 Leonard is a writer. He lives in a grubby bed-sit. His usual bread-and-butter being the inane poetry found on greetings cards, but now he is attempting something more worthwhile and grandiose. He is attempting to write a novel. He has therefore confined himself to his room to allow his creative juices to flow unhampered by the mundane distractions of his seemingly mundane life.

The trouble is Leonard is easily distracted, and his mind is given to wandering and eaves-dropping. This forms a part of his novel and he romanticises a relationship between the novel's hero and a lady in need of help in the flat next door. And his fantasy and his reality become inextricably linked.

The style of the play is what makes it so compelling, fascinating and unique. It is a piece of physical theatre, and more or less, a one-man show. Using all the elements of the genre - a genre which states that the physicality of the body (through movement, dance and mime) has far more importance in the story-telling than the voice - this 50 minute play takes you on a journey through Leonard's mind; as his wrestles with his novel. If Charlie Chaplin had done 'Noir' rather than slapstick, this is probably what would have been the result. Surreal, absurdist, dark, and atmospheric.

Tom Hardman plays Leonard with elan and skill. His every movement, even to the smallest movements of the eyes, perfectly measured. His obvious talent and love and understanding of the genre shining through. He is more than ably abetted by another skilful performer Cameron Jones, who enters and leaves the narrative at various points playing the characters conjured from Leonard's mind. It is all very slick, excellently thought through and immaculately rehearsed.

What would have made the piece a lot stronger for me however, would have been to not have had any dialogue at all. The recorded voices were fine, but to actually hear Leonard speak himself and converse with the intruder or the lady of his novel dreams, weakened the premise and the style. I found this unnecessary, and would have much preferred to have heard only the voices in his head.

The other thing that I found a little odd was the rather extravagant 'boast' on the advertising of the show which states that it "is an exploration of what it means to be a man" I didn't see that in the piece and so was a little confused by this statement. {the clips of films and adverts on the TV prior to the start of the show notwithstanding!}

However, personal preferences aside; this is Dapertutto's first outing, and with such a creative and professional debut, I sincerely hope to be seeing a lot more from this company in the future.