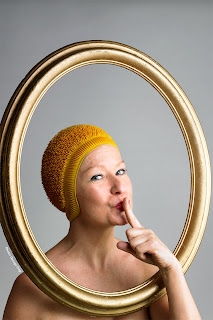 I came to see this show very much on a last minute whim. Totally unplanned, since a play I had already been to see at another venue finished earlier than expected. From the advertising that I had seen thus far for this show, along with the title, I have to say that I had completely misjudged the content. Mind you, if I can make this mistake, others can too. My mistake was thinking that this show was a comedy show about alternative visual artist Grayson Perry.

Let me make this clear now - it has absolutely nothing to do with Grayson Perry!

The Perry in the title refers to the lady performer herself, Kate Perry, who, over the course of the hour we spent in her company introduced us to a few characters that she has, in her own word, 'collected'.

These are well-observed and clever monologues of characters she has obviously drawn from real-life experiences and created these people in what is something of a cross between a Victoria Wood character monologue and an Alan Bennett Talking Head!

We are introduced to 12-year old Susie Simmonds, a posh kid from down south who is so intent on filming her live  video blog / documentary that she can't see the harm it is doing to her mum as she continues to feed her amphetamines. We watch pigeon fancier Jimmy Jones from Bolton wait for his favourite to come home to roost and watch him perform some very Jimmy Cricket antics too (was using the name Jimmy purely co-incidental??) And we are shown an Amish lady speaking in a cod German accent, relate her frustrations at being Amish and  relates the time her secret sexual desires were realised.

All these three characters had merit, but for me at least, did not hit high on the humour scale, with only a couple of smiles induced along the way. But it was the accents / voices of the characters which needed the most work. Amish are American and speak with US country accents. If she wanted to keep the German then more fitting would have been to portray a fin-de-siecle 'Puritan' from Northern Germany in the late 19th Century. The Southern English was peppered with her own Northern Irish, and the Bolton was so far off the mark it was simply not believable.

A better characterisation was a young girl annoying the passenger behind her on a flight. For people who fly regularly, especially when taking a flight to a family holiday destination, this is a common hazard. You want to sleep, read a book, anything but find yourself 'entertaining' the bored kid in front who has been watching you and chats openly to you. This was cleverly observed and performed.

Where Perry really comes into her own though is drawing on characters from her Northern Ireland homeland and in an age-old tradition, sending them up! Her green-jumpered Marie was a lovely character, totally believable and fully-rounded; whilst the best and funniest material in her act she used first, giving us the 78 year old Carmel, who, in that typical gossipy garden-fence sort of way, told us all about her fixation with Ken Barlow.

Perry is a skilled performer and a lovely raconteur. There are some, but too few, really good laugh-out-loud moments in the show, mostly it is story-telling with a little humour thrown in, with some of the sketches obviously appealing more than others. A pleasant hour's diversion.