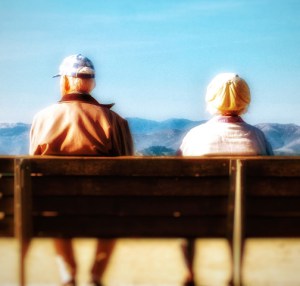 Due to some mix-up in communication, the company were unaware of my attendance and the show was a sell-out. I was therefore invited to sit on a stool at the side of the stage. An agreeable compromise, which, unbeknownst to them was something akin to torture for me since I suffer with a bad back, and so stools are a no-no! However, I endured the torture, and was, due to the superb script and fine acting, even able to forget all about it until the end!

ABW Production's A Fine Life is one of the best comedy scripts I have had the pleasure of watching in a long time. Anne Wynne's writing was confident, secure, mature, and very funny. Combine this with solid directing by Mike Heath and superb performances by the three performers, and you have a winning formula.

We are in suburbia, and an elderly couple live alone. As the play opens we see the 72 year old Annie pottering around the house and doing a bit of cleaning. Enter Martin, complete with overnight bag. The son. He has had yet another argument with his long-term girlfriend and has left her. His plan, it seems is to convince his mother that she isn't getting any younger and perhaps having him move in and help her and her husband now they 'aren't getting any younger' might not be a bad idea.  Of course Annie is having none of it, but he does persuade her to hire a cleaner. And even though no formal hire agreement has been made, suddenly out of nowhere enters Chelsea, and this is where the comedy becomes surreal, but totally intoxicating.  To give any more away of the story from here on in would simply spoil it for any first-timers - so I am keeping schtumm!

Annie's adorable Irish-ness and pliable naivety, combined with a solid realism gave her a truly delightful persona and Julie Edwards hit this right on the button! Kivan Dene gave a solid and believable performance of Martin, her long-suffering son (although one couldn't help thinking that the break-up was probably 50% of one and half a dozen of the other!) However it was Nicola Evans's utterly showstopping performance of Chelsea which truly made the play a stand-out piece of exceptional theatre. Evans not only had the right look and voice, but gave an acting performance that had the audience in stitches.

What started out as a bitter-sweet gentle comedy was turned upside down and by the end of the hour-long play, my cheeks were sore from laughing so much. But, all great comedy has to have moments of sadness, realism and even tragedy. Moments of tenderness and love. And yes, despite the play lasting only 60 minutes, this play had all of that too.