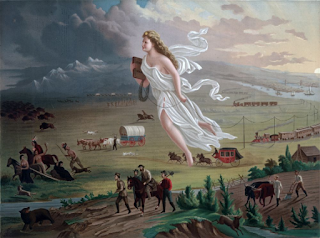 Yee-haw, well, come gather-ye-round y'all while I tell you a story......a-hem! Sorry, let's begin at the beginning.

In a large marquee out front of the main 53Two building [yes, we know it is directly under the trams - yes, we know it is noisy - we'll add a joke about it in the script and get on with the show!] is the Bobtail Saloon. A fully-functioning bar before the show and during the interval, and the bar in the show during the show, forms the set, and is managed by the bartender who is both bartender in the show and tending the bar out of the show. Well, I'll be dawg-gone, this ain't makin' much sense right now is it??!

Written, directed, starring, music composed and performed by Nathan Smith, this is Death By Pie's third outing as a company. They specialise in low budget off-the-wall comedies, and they don't come any zanier than this! and you may be forgiven for thinking that because Smith has taken on such a huge and prominent role in all of this, the show is all about him. Not at all. This is a fully-integrated ensemble piece of theatre and but for the programme telling me all of this, you wouldn't have been any the wiser.

The marquee, the saloon bar, the poker-player cowboys, the western drawl, all excellent and lovely parodies setting you up for what is to come. There is no way you could walk inadvertently into the tent and not know what was happening there. And once the bar (sadly not selling Bourbon - only Scotch, but we'll gloss over that inaccuracy) closed and the show proper started, then it was a slick, fast-moving, gag-a-second rollercoaster through to the very end. And even though it was played very much for laughs, and the characters stereotyped there was actually a real story-line.

If you think what might have happened had Spike Milligan done 'Blazing Saddles', then you'll understand the kind of show this was. There's punnery, visual comedy, slapstick, innuendo,  and humour-full narrative-continuing Western style songs [played on guitars with a little help from a cymbal, triangle and a small round stringed instrument which I have never seen before......!], and the whole thing started with a silly but clever re-invention of a Western film opening title sequence, followed by a Tarantino-inspired stand-off to decide who has the best story to tell, and who will be the one to tell it....!

The story involved cathouses, poker, line-dancing, poisoning the whisky, and the question of paternity of Crow, a native 'Injun'.  And since the story was set up in a series of interconnecting vignettes, some of the skits appealed more than others. It was the ones which stuck closer to humour associated with the Western theme which for me were the cleverest and hit the mark better - some jokes took their inspiration from all kinds of sources unrelated, which, although hilarious, perhaps were a little too far out of place here.

Hannah Hobley, Scott Hodgson, James Beglin, Roisin McCusker, Nathan Smith (and his wondrously deep and sonorous voice!), and Dan Brazier play 35 characters between them in the space of 100 minutes but the changes are clever, swift, and always clear. Hobley was excellent as she transformed from a gnarled old granny to an excitable naive jumping Lil' Jimmy; and among my other favourite characters to emerge from the mire was Beglin's sardonic and repetitive Eli Jones who always spoke in the third person, and Hodgson's lovely transformations between cathouse whore Emmylou and Painted Crow.

What made this show work, and work so well, was the cast's utter and steadfast belief in it and their giving it their 120% of creative energy and talent. Done by any other company and it would have fallen flat on its lil' ol' tootsy! A rip-roarin' good time spent in the Bobtail saloon with its array of colourful, disreputable characters was had by all!