Sex With Robots And Other Devices - HOME, Manchester. 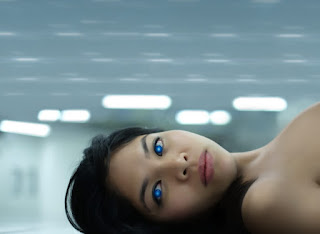 'Sex With Robots And Other Devices' by Nessah Muthy explores humanity’s response to the introduction of ‘Sexbots’ - robots built with the sole function of fulfilling their owners' every sexual desire. There are various modes and settings and one can upgrade and downgrade according to what suits their needs. There’s the emotion setting where the robot will develop feelings but never fear, if it becomes too much you can always just downgrade or reset!

So how as humans will we deal with this and how will it impact our relationships with actual human beings?

Throughout an hour and 15 minutes we see eight playlets navigate this strange world. One couple use the ‘Sexbot’ to satiate the male partners libido after the loss of a child leaves the woman unable to do so. Another man relives the night when his ex conceived their baby again and again. etc...

Three actors multi-role and are present in the space as we enter. The audience were encouraged to sit on the stage and the seats were filled eagerly. The set consisted of a taped-out rectangle and initially a duvet on the floor which changed accordingly throughout the piece with the actors using token pieces of set and costume to denote the change of scene. These transitions, whilst simple, and this is probably the intention, were something of a missed opportunity. The actors gave glimpses of their physical ability and I felt this could have been utilised more effectively throughout and particularly through the transitions.

The fact that there were eight playlets crammed in to 75 minutes meant each was given only a short time and was not really fully explored and as such neither was the concept of each piece nor the thing as a whole. For me, I felt perhaps it should have raised questions and been thought provoking and I suspect this was its aim but it sadly fell short due to trying to fit so much in to such a short time.

The final scene where one ‘Sexbot’ malfunctions and repeats the word humanity felt like an afterthought and again, had such potential to physically engage all the actors in some kind of movement which conveyed the message much more powerfully. The actors themselves moved deftly between each character and two out of the three were particularly strong. Unfortunately there was no programme and as such I cannot name names. I left feeling a little underwhelmed by a piece which conceptually had so much potential but never really rose to the occasion.