The Jury - The Brindley Theatre, Runcorn. 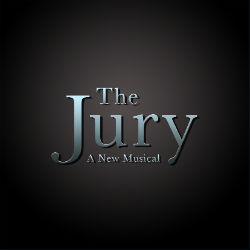 The Brindley is an interesting choice for the world premiere of The Jury but this well organised theatre is fast becoming the place to go to see innovative and new work as well as touring shows.

There was an excited buzz about the auditorium that continued inside the theatre space which was open to a dark and moody set, ample dry ice and eerie rumbling music reminiscent of an Agatha Christie whodunit.

The partially wallpaper peeled walls and huge old fashioned wooden table with twelve ill-matching chairs gave great promise of things to come. This was not accidental as we discovered with some startling lighting and sound effects as the cast of twelve miss-matched jurors appeared. They each took their seats at the table deliberating a murder verdict involving a man who has confessed to stabbing his wife but pleads self-defence. The jurors didn’t know what but something didn’t feel right, like the worn-out room they were in there was something dark and very wrong. The judge was awaiting their decision and will accept a majority vote but they were in a deadlock with six votes guilty and six votes not guilty so the jurors decided that the foreperson must decide. As the jurors’ stories emerge you began to understand why the show is called The Jury. Writer Amy Fletcher emphasises civic duty and the show becomes much greater than the verdict as the jurors face personal and moral dilemmas that threaten to influence their vote. The themes are heavy and this show attempts a lot. Loss, domestic and child abuse, mental health, gender perception, perspective, parental love, ageism and above all truth and justice within the structure and confines of modern society and its rules.

This is however a musical and the all-original music and lyrics by Ashley M A Walsh, who also acts as musical director (and set designer), serve to lift the weighty subject at hand and there are eighteen songs to help tell the story. The well-rehearsed cast, rise fully to the task with rapid tempo patter singing both individually and in glorious choral harmony. Laura Coard shines as Sarah Edwards the social worker and elected foreperson singing with a pure clarity and beautiful tone. She leads the jurors and herself on a journey of self-discovery as they confront their own prejudices while trying to keep everyone on track with the evidence to hand. Laura Meaton as the unassuming, forgiving Hannah in Marketing gives a heart rending solo performance of a beautifully phrased song that leaves the audience wiping away their tears.

Under the direction of Joseph Meighan, there were several stand out moments as the story goes back to the jurors first meeting. The characteristics of the twelve initial strangers summoned, mostly against their will, for juror duty begin to be revealed through a hilarious role-play re-enactment of the murder, instigated by amateur dramatics enthusiast Bethany Grace as middle class housewife Deborah ‘but-everyone-calls-me-Debbie’ Winters. Grace provides well-timed comic relief throughout and plays gloriously off Benjamin Cupit’s bullish CEO of a multi-million-pound company, Darren Lyons, who is oblivious to her wistful amorous advances. Cupit convinces in the role as he faces up to some harsh realities.

In the second half, we follow the jurors in their search for the truth and in doing so they form alliances and friendships; with unlikely pairings, such as young and sassy beautician Jodie Walker who has had to miss a Benidorm holiday, played by Alexandra Wood in her first professional role, with sixty-nine-year old long suffering wife Alma Collins played by Elizabeth Brooks who shuffles about the stage in her cardigan with a foot in the past and an eye to the future. The differences could be stepped up a tad and Wood can only grow in confidence with this run of The Jury.

By the end of two and a half hours, including interval, the overall feeling is of being on a journey together. The audience is challenged throughout but above all thoroughly entertained and the production well deserved its standing ovation.