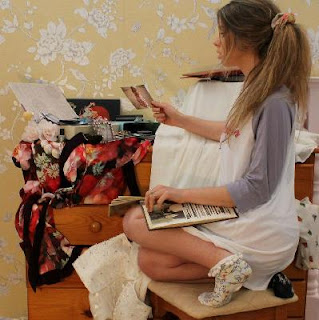 Having read the publicity for Paisley before I arrived at the Leaf Café on Portland Street, I was expecting something a little out of the ordinary. It had been described as a “deeply personal piece of theatre focusing on culture and its development from a woman’s perspective” – and this was very much all of those things and probably more.
The scene is a typical girl’s bedroom with clothes strewn over the floor, a large mirror and dressing table and lots of personal touches dotted around the room. The girl in question was Paisley, dressed in her pyjamas and brushing her long blonde hair. In walks her mother and proceeds to collect up her abandoned clothes whilst bemoaning the untidiness. Paisley is due to get married on that day, her wedding dress hung up and still in the protective wrapping, and all things are clearly not as they may seem.
The overall story was one of women supporting women, with each of the characters telling their own tale of past struggles but each in a very unique way.
First there was Paisley’s mother who had talked very little of her past before Paisley was born, but in a Bollywood-style dance interpretation she shows how she had to battle against the odds in a war-torn land before escaping in order to build a life that now included her daughter. The dance was beautifully choreographed and with the exception of a scene where cast members came out wearing cows' heads it perfectly described her story – I struggled to see the symbolism that was being portrayed with the cows' heads.
There is Kira, the mother of John (Paisley’s groom-to-be) who had to endure an abusive husband when she married very young. Her story is told through the medium of Japanese puppetry, using beautifully created paper puppets and a shadow box to display the show using the grand fireplace in Paisley’s bedroom.  Whilst the fireplace seemed like the perfect setting for this, being sat on the back row on seats (albeit with only 3 rows) I struggled to see everything that was going on and judging by the arching necks around me others did also.
Gabby’s story was next (Paisley’s best friend through her childhood) who suddenly reveals she is gay and talks about the struggles she has had with her sexuality and her relationship with her own mother since coming out. Gabby sings her story in perfect pitch, switching between English and Spanish lyrics throughout.
One of the big things that came through in this performance is the attention to detail – the set design is just about perfect with every element playing its part in setting up the performance. The girlie touches that are placed around the room and even family photos just make this the perfect setting.
I enjoyed the performance of Paisley very much, the stories of struggles for each of the women were varied but all had the same underlying message – strength in adversity, women supporting women and true equality for women to stand shoulder to shoulder with their male counterparts. I did feel like the play was just trying to tick too many boxes with the different methods of storytelling but art is about pushing boundaries and I think Paisley did this.