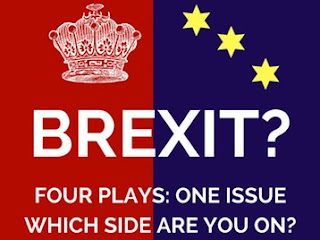 DIY West End, a Morecombe-based company, bring the current political hot-bed to Salford's King's Arms as part of The Greater Manchester Fringe Festival. The company, trying to improve the image of that last bastion of Victorian seaside splendour in Lancashire, held a one-act play-writing competition and this evening the winners and runners up of that competition were presented back-to-back.

The first play, 'Tomato Soup' by Paul King was the highlight of the evening. A superb study of an elderly man living alone and his Polish carer. My parents both need carers and indeed one of them is Polish (although she doesn't come from Łódź), and although I don't think my father is quite as bigoted and xenophobic as this man, it wasn't difficult to see this as a real scenario. Steve Longstaffe played Trevor, the man who needed and relied upon his paid help, Hanna (Marianne Walsh) not realising or caring that she was just 'another of those bloody foreigners who are stealing jobs and ruining the country'. And when challenged his response was typical...'you're different, you don't count!'. A lovely piece of well-observed comedy writing, sensibly and sensitively handled.

The three plays that followed never quite got back to the bar level at the start. 'In The State Of Love' by Francis Grin saw a young woman (Sophie Cain) eulogising on the meaning of love from alternative religions' perspectives, until she goes on a date with old school flame (Eathon Young), and this is where the story takes on a rather different quality, something akin to a spy thriller. The punchline though is a huge let-down and so far off the realms of reality that it simply didn't work.

'Half' by Laura Harper was a post-Brexit apocalypse. Leavers fighting Remainers, and the country is in a state of Guerrilla warfare. Two Remainers are caught trying to board a ship leaving the country by two Leavers, and the ideas of 'leave' and 'remain' are instantly turned on their head! A nice premise, and an interesting start which again diffuses and the impact lessens the longer the play continues. Finally the last of the four plays was by far the weakest; 'A Mummer's Play' by Nick Maynard. A group of Mummer's tell a tale of The King of England and a goblin. the allegory is clear and the vote for Brexit and England standing for England was certainly the over-lying message. An nice idea but clumsily realised.

Generally the acting was of a high standard and the pieces were all sensibly directed by Daneka Etchells and Will Nelson. An entertaining and perhaps fresh look at some of the issues pertinent to our country leaving the EU. (as if we haven't had enough of all that already.....!) But, don't let that sentiment put you off; these are interesting plays and stand on their own whatever your (or the playwright's) political conviction. Go for yourself and make your own mind up!