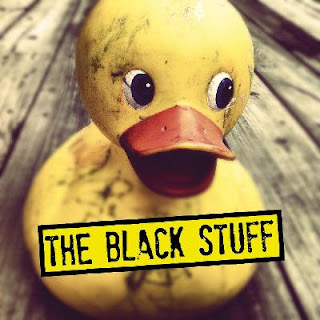 This has nothing to do with a cult 80s TV drama which had boys coming from it; nor has it anything to do with the usual substance given this title, oil. No, the black stuff in question here is rubber. More specifically, it is a romanticised and not entirely historically accurate musical about the man who is accredited with developing vulcanised rubber, Charles Goodyear.

Presented by Lioness Theatre and directed by Liz Kearney, The Black Stuff musically is very strong with a soaring and contemporary Musical Theatre score by Holl Morrell, and if for no other reason than to showcase her music, and allow the audience to see for themselves what potential this show has, then it was worthwhile. In its present form however, it has little more to offer.

The book (ie the spoken part of the musical) couldn't make its mind up what genre it was in. There was pathos, bathos, tragedy, and Monty Python style silliness. There were real tears being shed for a dying infant juxtaposed with lines like 'let me check on google to see if that phrase was around in the 1840s!'. There was a distinct lack of sincerity in their characterisations, and yet we were supposed to care deeply for their (or at least Clarissa's) plight. And to top it all we were presented with an extremely camp narrator who applied black lipstick (the only change) in order to change his character to that of Goodyear's rival Thomas Hancock.

The show utilised 4 performers. Danny Dixon as Goodyear was vocally by far the most proficient and he had a solid and personable stage presence. Maureen Louie played Goodyear's wife with resigned defeatism. It was the first half of the 19th century and so a woman's place was very much in the home and there to support the husband. However, as well as having a corny and self-apologetic line which excused the cast from speaking with American accents [although Dixon's accent was pretty much spot-on!], they should perhaps also have included another to say that the year is really 2018 and colour-blind casting is very much a la mode, so even if Goodyear didn't have a black wife in reality - he does now, suckers! Louie's vocal ability and sonorous tones were lovely, but I had trouble trying to sympathise with her... even at the moment when she seems to be the one who actually discovers the vulcanisation process, it was dismissed and completely underplayed.

Alex Wilson and Andy Pilkington played everything else between them. Wilson's physicality and booming voice made it very difficult for him to metamorphose into so many different roles, and so instead he more or less stayed exactly the same throughout, and despite his vocal ability both he and Pilkington had difficulty keeping up with the show vocally.. What didn't help was that some of the time stick microphones on either side of the stage were used, and other times the songs were unamplified, Sometimes however it was a combination of both, and this was very odd indeed.

Staging and budget restrictions notwithstanding, this was a production of very mixed messages and very Curate's Eggish. However, all Musicals have to start somewhere - there has to be a CONCEPT and a concept performance and album. If this is indeed what this afternoon's show was, before going back into further development after take audience comments into consideration, I can only wish the company well, and would love to see it in its next incarnation. There IS potential in this Musical and, it does, as a line from the Musical says 'have legs', but it hasn't found those legs yet.