Joseph And The Amazing Technicolor Dreamcoat - The Forum Theatre, Romiley. 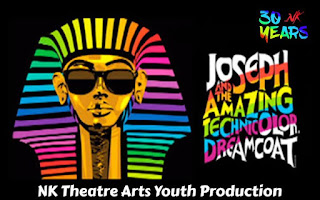 On a very hot and balmy Wednesday night, when most of the nation was watching England’s nail-biting World Cup semi-final against Croatia, I ventured to Romiley Forum Theatre to watch NK Theatre Arts' Youth perform the biblical classic (Junior version) of Joseph And The Amazing Technicolor Dreamcoat. Celebrating 30 years of amateur theatre and a wealth of successful patrons who have gone through its doors, NK have a strong tradition of successful performance and standards and their productions hit the mark on lots of levels.

The cast was vast and appeared to range in ages from around 5-18 which made for an eclectic mix and I think at one point had over 50 performers on stage!

The staging was a basic scaffolding structure with suspended drapes to light the main stage which was effective with a backcloth of Joseph’s rainbow colours – named in the famous song – as a fitting reminder throughout. The lighting plot really worked well in ‘Any Dream Will Do' as it revolved through the many colour cycles against the enthusiastic choral singing.

The ensemble paraded in and watched the action from floor level on benches which worked and three sets of block steps allowed them quick access to the main stage for their company numbers.  The ensemble was well drilled and disciplined, colourfully dressed in a simple costume plot of different coloured t-shirts and tops and sang lustily and clearly in all songs.  Some really nice harmonies in ‘Any Dream Will Do.’

In the title role, Robbie Richardson looked and acted the part and gave a mature and controlled portrayal. His singing belies his years and he had a gravity and resonance to his singing which really carried through the auditorium and gave him a well-deserved standing ovation at the end.
Our narrator was Lucy Clarke who had the hardest, and possibly most important role, as without clarity and diction and storytelling through facial expression a lot of the narrative in the piece could have been lost.  Lucy had it in abundance. A really lovely voice and some effortless singing too with great musicality.  Even a slight hitch at the start of one of her songs didn’t put her off. She knew exactly what to do and pulled it back in seconds. Well done.

The twelve brothers were played with jealous and hateful enthusiasm by a varied group of individual young men. Lots of facial expressions and characterisation. They had some of the best numbers in the show and enjoyed every moment. The cowboy style ‘One More Angel In Heaven’ had lots of comedy and variety. I particularly enjoyed the young man who performed the ‘Benjamin Calypso’ who made that his own with his comedic facial expressions and modern ‘tip of the hat’ dancing. The ‘For’tnite’ moves didn’t escape my son’s notice.

Other noticeable performances came from Potiphar and his wife in their stylish number supported by a graceful set of dancers who "vogued" through the sand dance moves with panache. This junior production glossed over the undertones of Potiphar’s wife’s attempts to seduce Joseph and the furious husband’s reaction to unfairly imprison Joseph.

In Act 2 we have moved to Egypt with a costume change into all white clothes which worked well and struck the difference in place and time. The Pharaoh and his Elvis style song was well performed by Ben Rose and he certainly had the vocal style and some of the moves to pull off an Elvis tribute.  I wasn’t too sure of his pyjamas later on but that’s a minor grumble.

The evening ended with a rousing ‘Any Dream Will Do’ reprise (but no big parachute coat for Joseph). The entire cast covered the stage in sound and colour and despite an airless auditorium sweltering in heat they gave it their all which was well received by a highly appreciate audience of friends and families.
Congratulation to the production team of Hannah Gorst and her able assistants for a highly successful and enjoyable piece of youth theatre. Lots of future stars could be seen on the stage this evening along with a sea of experienced, older youth members and the younger members being nurtured and given excellent coaching and support. Enjoy the rest of your run.