Rhythm Of The Dance - The Brindley Theatre, Runcorn. 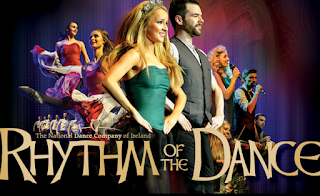 The modern but cosy four hundred seat Brindley Theatre plays host to the National Dance Company of Ireland's touring production of talented dancers and musicians: Rhythm Of The Dance.

The billing states, ‘The show features a live band, Irish Vocalists & Champion Irish dancers’. Expectations were high. It was a full house. If you have never witnessed Irish national dance live then you cannot fail to be impressed by the sheer stamina and mesmerising footwork of the intermingling traditional and modern step dance numbers. The style is formation dancing meets flamenco with balletic shaping and tap after glorious tap. The swivel footed high kicking troop of fourteen dancers fill the small stage as in the first half they play out their tale of leaving the Irish homeland for a more promising America only to long for home so much that they return to Ireland at the end of the second half.

You need a programme to understand the story, a glossy, photograph filled souvenir bargain these days at £5, otherwise each song and dance stands alone as a fun showcase. This show is not for the Irish dance purist or the traditionalist, there is too much detraction for that including a jive number in the second half that quite takes the audience by surprise. The producer, Kieran Cavanagh frequently shows his credentials as a successful international promoter and this show is aimed at a worldwide audience.

The women, headed by lead female dancer, the award-winning Amy Marie Prior, dazzle in their numerous costumes that shamelessly flout Irish step associations rules of skirts measuring no more than four inches above the knee but it is the men who literally stamp their authority on this production. Each time they take to the stage the audience cheer at the confidence and skill of these agile young men who enter like magnificent matadors. The troop is lead by the outstanding leading man, Dane McKiernan, who is also the choreographer. McKiernan is the epitome of leading by example and you can see the love and the discipline that he pours into his cast.

The mix of tap with balletic movement is visually stunning and musically thrilling as the stage microphones amplify every synchronised click. This produces a fully inclusive format that transcends cultural differences and language so it isn’t hard to understand their global success. The production is brought together under the musical direction of Chris Anglim, from County Limerick, who also composed the music. Five multi-instrument-playing musicians had ample opportunity to display their talent with each at some point giving solo performances and with the show incorporating several music only scenes that had the audience's feet stomping and clapping along. The tin whistle never sounded so melodious and the Uilleann pipes (Irish bagpipes, pronounced ill-in, it helpfully states in the programme) were haunting, and with an entire scene called ‘Bodhran’ thrown in consisting solely of the fastest drumming ever seen, on not one but two bodhrans, and you feel you’ve heard it all.

That is until the second half which after the audience had settled down, realised there’s not going to be another thirty dancers and got into the rhythm of the show, takes off with even more spectacular music, singing and dancing. The reels get 'reeler' and the story gets cheesier with a long-faced sitting around the campfire ‘Thinking of Home’ song. That done, it’s the build up to the homecoming back to Ireland finale. The players gather for the ‘Musicians Farewell’ and draw the audience in so you feel that we’ve all sneaked away to the pub for an Irish night knees-up. The instruments come out and lead by a guitar the players try to outdo each other with their performance while appealing to the willing audience to join in clapping and stomping along. The scene is rounded off to thunderous applause with an hilarious attempt at an Irish dance ending with the would-be dancer jumping and kicking like a drunk at a wedding.

The finale is a fast-paced bedazzling line-dance extravaganza that has a feel-good factor forgiving the earlier occasional flailing arm or mystifying storyline. Rhythm Of The Dance lasts an acceptable two hours including a twenty-minute interval. The UK tour continues night after night in different towns until 11th August with barely a day off. Go to be entertained and be prepared to clap along.