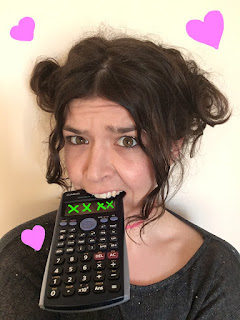 Rosa Wright is a poet. Wright thinks she has found the formula, the equation, the answer to finding true love. Through some maths, spoken word, and song, we join Wright as she explores her love life and the different kind of relationships she has experienced. There are the relationships when things just add up beautifully, or when things subtract horribly, or when there is a harmonious feeling of equilibrium.

So, what was this perfect calculation to find true love? It involved counting the letters that appeared in both names of two people who might like each other. Then, you added up those numbers in a particular way. Finally, that would determine the overall percentage of how compatible they were as lovers. The result in this performance was 54% compatibility between the two random audience members. Now, in reality this was an example of playground maths, however it was a playful way to open the show and to spark some interest.

The performance was structured around a love themed bingo square. Every time an audience member said a number, you crossed that number off and either a song or spoken word piece was performed. All the traditional rules of bingo applied. When you shouted out "bingo" you got a prize, it was some love hearts sweets, which was a lovely idea. It was a creative way to reinforce the metaphor that love is a game. Various scenarios of love were investigated during the performance including: long distance relationships, when you have to dump someone, dating someone older than you, and life changing love.

As an artist, Wright has found her own unique style of writing. Her songs and spoken word focused on specific and perceptive details in a story, sometimes this involved the senses other than sight. The writing possessed humour and charm, marrying ideas together with fluidity and rhythm. Wright adapted the show appropriately for a small studio space, and was always friendly to the audience, responding well to them.

There was a successful distinguishable difference in performance style between when she talked to the audience as her quirky usual self, and when she performed her spoken word and songs with passion. One point I wish to add though is, that personally, I felt some of the songs (sung and played on ukulele) needed just a little more practice. Also, it's important not to let the audience distract you and make you laugh, which happened a couple of times. Overall though, Wright's performance was very good.

Conclusively, not only was this a spoken word and music performance but it was an autobiographical piece too. It was wonderful to see Wright's honesty and openness on stage and most importantly she made her story relatable to the audience. Wright + her performance = a positive show.