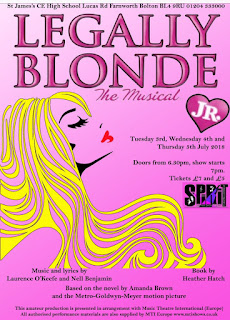 ‘Oh my God, oh my God you guys!’ Legally Blonde hit the stage with all the glitz and glamour of any smash hit musical at St James High School Spirit Theatre this evening. Directed by Johanna Hassouna-Smith and directed musically by Mr D Bahakam I knew I was in for a treat following their highly successful Les Miserables last year.

I met Johanna Hassouna-Smith before the show who told me that her theory with a high school production is that you want to produce a show which is as close to the professional productions on the West End as your budget allows. As schools don’t offer budgets for shows it’s bums on seats that matter so they need to make shows that are worth watching. She doesn’t believe in leaving anyone out and her shows are completely inclusive regardless of the audition, “ of course those who excel will get the lead roles but all students who want to be on the stage can as it’s the only time in their life they can do exactly that - to feel the adrenaline and soak up the applause giving them priceless memories”.

The scenery and set was built by the caretaker and Art Department which was magnificent in its design giving any professional designer a run for their money. The choreography was put together by three very talented students Caitlin Browne, Alisha Hope and Peace Ojerinola.

The story of Legally Blonde follows the 'girl power' story of the beautiful sorority sister Elle Woods who is deemed not ‘serious’ enough by her boyfriend Warner as he heads off to Harvard Law School. In order to win him back she gets herself a place at the prestigious school and works her way up to being taken seriously by getting herself an internship with a little help along the way from her Delta Nu friends played by some extremely talented and versatile students, Emmett played by Rohan Macleod and Paulette the vivacious hairdresser who all guide Elle to her destination and place in Law.

The scenes were full of energy and all the cast seemed to be having a lot of fun on stage. Special mentions must go to the fantastic cheerleaders and ensemble who kept the show going with their high energy numbers. Also huge credit to the wardrobe department as the costumes were outstanding throughout the show especially the cheerleaders outfit, the prison outfits, the Irish dancers, but best of all was the amazing amount of pink and glamour.

Emily Griffiths played a great Elle Woods with her impressive vocals and stage presence, Kenyon Garrish matched her perfectly playing Warner but the highlight for me was the young fella who played Callaghan, a 13-year old Ethan Browne, who held the audience with his tremendous interpretation of the mean and ruthless lawyer and lecturer who hits on Elle.

The school production of Legally Blonde is a perfect script for young up-and-coming stars to showcase their talents with in its high energy and sassy script and where the underdog comes on top leaving the audience with the warm glow of positivity at the end as they leave the auditorium.

Well done to all involved and I look forward to next years production.