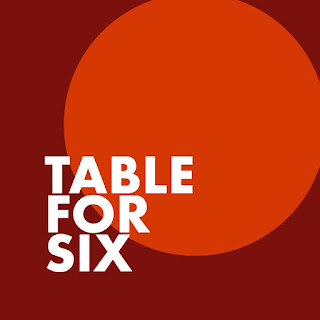 Using the restaurant seating in the space between the restaurant proper and the theatre, the audience of diners were invited to sit at the tables. We were presented with a menu - a list of 5 dishes which could be ordered in any order at any time (just one at once!). The dishes were monologues written by members of the Young Company, whilst another member was given the task of performing them directly at your table. For me, this meant a one-to-one as I was the only person sitting at my table.

I have very rarely - outside of a drama classroom - had such a relationship with an actor. It is actually quite scary, since you cannot simply be completely passive as you could say with a computer screen, but instead you find yourself nodding, tutting, or adding the odd word of agreement or encouragement. You become completely embroiled in the moment of the monologue and even start to empathise and relate in a way you simply cannot do when you are just a single audience member watching a play unfold on a large prosc. arch stage.

Of course, this is entirely and wholly due to the quality of both directing and acting. If either had been anything less than 100% solid, the crack would have shown itself a lot larger than it would have done on the aforementioned large prosc. arch stage. Happily there were no cracks - not even a slight fissure! The commitment and belief in their stories was total.

There was only one fly in this otherwise unsullied ointment. With 5 monologues to choose, and with there being so many tables, it would have been almost impossible to have had the opportunity of watching all of them in the time allocated for this event (1.5 hours). I was lucky enough to have three such individual encounters, and sadly I had to leave a little earlier than the finish time due to prior commitments, but still would not have been able to see all five even if I had have stayed.  Organisationally then, there was a lot of room for improvement. Perhaps making a rule that it was minimum of 5 people to a table; limiting the number of tables. giving the actors a definite order in which to circulate etc etc ... would have solved this problem.

Fortunately I was able to eaves-drop a little on the two performers who did not directly interact with me, and so, did get a complete flavour - or at least 'aroma' - of all the dishes on offer.

To my table were Zoey Ndlovu's post-apocalyptic nightmare vision 'Ready Brek' (written by Terri Jade Donovan) which was utterly stunning both in quality of writing and acting; Adam Hussain's distopian vision of being an illegal alien 'Box' (written by Eleanor Cartmill), again superbly crafted and sincerely acted, and Isah-Levi Roach's humorous fantasy with a twist in the tale about falling in love with a fellow runner, 'Running' (written by Lewis Woodward).

The two I missed out on were, I feel certain, of the same high quality, and as the Royal Exchange's Young Company continues to grow and become more and more recognised, it is these young actors and actresses who hold the future of the genre.. and if so, then we are in very safe hands!