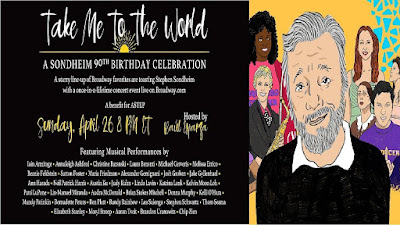 Stephen Sondheim, perhaps American Music Theatre's greatest living composer, and certainly one of the world's most celebrated and loved, is 90 years old! In order to celebrate not just his birthday but also his life and career to date, well-known US national and international stars gave their time and talent freely to record either a birthday message or a song (or indeed both) from their homes in isolation to make a 2-hour long concert which was streamed live last night.

This was one mammoth undertaking, and happily it all worked excellently (one or two minor technical hitches notwithstanding - but this was easily overlooked under the circumstances). We are all in lockdown at the moment, and so we are having to cope and utilise only what we have in our own homes. The evening was directed by Paul Wontorek, and musically directed by Mary-Mitchell Campbell, and the concert was given in aid of the charity ASTEP. (Artists Striving To End Poverty).

In this two-hour extravaganza, many famous faces cropped up singing or passing birthday greetings and messages of support, and there were also many faces in there which I did not recognise or know anything about. This is one of the things which amazes me: which artistes get to be famous on both sides of the pond, and which don't. We have many many talented theapians and performers who'd be unknown stateside, and in this concert, the opposite was true. However, there were also many I did recognise and was delighted to see people such as Patti Lupone, Meryl Streep, Judy Kuhn, Mandy Patinkin, Maria Friedman, Lin Manuel-Miranda, Lea Salonga and Bernadette Peters all perform for this special one-off concert.

It also has to be said that not all of Sondheim's extensive ouevre was accounted for this evening. Most people chose to sing songs from the well-worn standards such as 'Into The Woods', 'Sunday In The Park With George', 'Follies', or 'A Little Night Music'. However, there were a few hidden gems in this concert too, and I mean real gems. Judy Kuhn singing "What Can You Lose?" from the film, Dick Tracey (sung by Madonna in the film) was one such gem. Other especial favourites of mine were, Raul Esparza singing "Take Me To The World" and Laura Benati singing "I Remember", both from 'Evening Primrose' (a show that I had until this evening never even heard of!); Linda Larvin singing the wonderfully comedic song "The Boy From..." from 'The Mad Show'; Brian Stokes Mitchell's rendition of "The Flag Song" a song which was cut from 'Assassins'; and Elizabeth Stanley singing "The Miller's Son" from 'A Little Night Music'. My absolute favourite of the evening though has to go to the brilliantly funny Alexander Gemignanit for his delightfully playful "Buddy's Blues" from 'Follies'.

The evening started with Stephen Schwartz (himself a renowned Broadway composer) playing the overture to 'Follies' on the piano, and finished with doyenne of the American Musical theatre, Bernadette Peters singing an unaccompanied rendition of "No-one Is Alone" from 'Into The Woods'.

Fortunately the recording of this concert is still available to watch on YouTube and the link is here: https://www.youtube.com/watch?v=A92wZIvEUAw

Also, for those who would like to make a donation to the charity ASTEP, then details of how you can do this are to be found here: https://www.broadway.com/sondheim90/