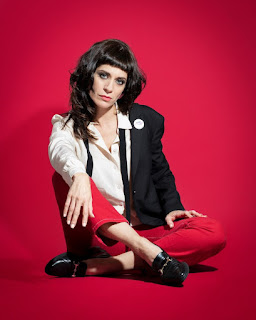 Today, Nicole Atkins shares her new music video for the French electro-inspired, groove-heavy pop gem 'Domino'. The latest single from her forthcoming album 'Italian' Ice is an ode to the wild magic and scrappy beauty of her Jersey Shore hometown. The visual, directed by Taylor McFadden, finds the fearless style queen strutting across the Asbury Park boardwalk with the utmost swagger, encapsulating Rolling Stone’s declaration that “Nicole Atkins is done playing it safe on ‘Domino'.”

“Domino is a homage to the iconic opening scene to 'Saturday Night Fever', mixed with Nicole’s Italian roots in Asbury Park and that boardwalk soul," says Taylor McFadden. Nicole has been performing each week with special guests on her own Patreon page, Natkins Funhouse, in a series called “Alone We’re All Together.”
Learn more about the Patreon exclusive series here, which the Nashville Scene called “a golden opportunity to get up to speed on her phenomenal songs”: www.patreon.com/natkinsfunhouse