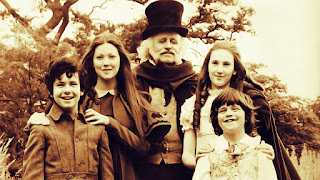 I have often chased my colleagues and fellow reviewers when they have been late in sending their copy for editing - however I have never been some 48 years late in writing a review before! I watched this delightful film - The Amazing Mr. Blunden, first released in cinemas in 1972 - for the first time last night on Talking Pictures TV channel [Freeview TV].

Why on Earth would anyone want to write a review about it then? - It's a fair question. However, it struck a chord with me, and found myself crying over the film and thinking about it all evening. I tried to analyse why; since in many ways it is a most ordinary film and completely a product of its time. And then it struck me.. that's entirely the reason, it IS a product of its time, but gave me very many good memories and took me back to my own childhood and "how things used to be".

The story surrounds a poor fatherless family in 1918 moving to a rambling and derelict country estate to live in the grounds' cottage. They were advised to do so by a certain enigmatic Mr. Blunden, but on arriving there finding that the place is actually worse than where they left, and the house had been burned to the ground. Oh, and there were ghosts too.....! However, the ghosts are friendly and helpful, and the two children go back in time to help them and release Mr. Blunden from his century of guilt so that he might rest happily ever after. There's a lovely ending too, which I won't give away just in case.

I was born in the 1960s and spent much of the early seventies exploring a local ruined castle - which of course had ghosts too in all our childish imaginations! The castle did belong to my long-dead ancestors too, so the ghosts we saw were all long lost family members! This film encapsulated both my memories of childhood and how we were as children too to a certain extent. Not the Victorian bowing to your elders and obeying them without any arguing even when you knew it was to your detriment, but certianly in the way respected our elders, as well as the way we spoke, played, and understood the world. I would not be exaggerating to say that I had an idyllic childhood, and one that no child born in the last 20+ years could ever hope to imagine. I had never seen this film before, but knew its cast from other films, and the whole style, and even the storyline, were straight out of that era, a kind of Enid Blyton / Oliver! / Roald Dahl style which is no longer relevant, sadly.

The film starred 4 children, all of whom impressed and gave lovely performances. They were Rosalyn Landor, Marc Grainger, Lynne Frederick, and Garry Miller. Whilst the adult cast was headed by Laurence Naismith (Mr. Blunden) with Diana Dors in a role which could not have been less glamorous as the almost pantomimic wicked  Mother-in-Law. The film was lovingly directed with craft by Lionel Jeffries {better known as the director of The Railway Children and of course as Grandpa Potts in Chitty Chitty Bang Bang!}

For those of you of a certain generation who wish a trip down Memory Lane, and for those with children who would like them to be entertained and enthralled with something other than police chases, sex, drugs and violence, then I cannot recommend this charming, innocent, delightful and engaging story enough.