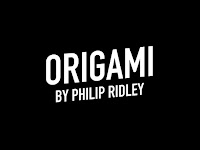 The latest in a series of online world premiere monologues by Philip Ridley, performed by the cast of the ill-fated 'The Beast Of Blue Yonder' which was due to open at The Southwark Playhouse just as the Covid Lockdown was announced. Each week a different member of that cast, directed by Wiebke Green, performs one of Ridley's brand new writings and are available to watch on the wearetramp.com website.

This week it was the turn of Nat Johnson, and a short (4 minute) piece titled 'Origami'. No strange beasties or dark mysteries in this piece, and it was even set in the London of the present. In fact, after listening to the first three, this one was actually very normal and somehow mundane. That isn't to say it wasn't excellently performed by Johnson, as it was. She brought a realism to this piece with a hint of sadness and a hint of anger, both seemingly bubbling but never enough to fully emerge. Excellently measured.

It's gentle, no real punchline as such, just sad and poignant. Sympathetically read by Johnson.