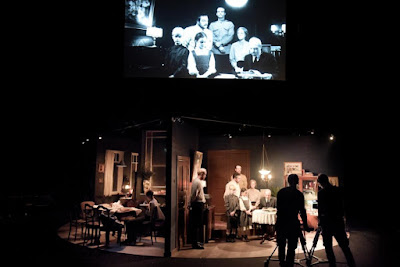 As theatres all over are temporarily closed, many are offering past productions online as a way of both maintaining interest in the theatre, and also in the hope that those who do watch might donate a small amount of money in order to try and keep the cogs running until such a time as theatres may once again open. The Schaubühne in Berlin is no exception, and their website offers a varied array of their productions, discussions and lectures.

This evening it was the turn of their 2017 world premiere production of  'Lenin'. The play was devised and written by Milo Rau, who also diected it.

In a nutshell, the play focused on the last years of Vladimir Ilyich Ulyanov, (Lenin), and the changing shift in political emphasis as we see a critical shift in ideologies between him, Trotsky, and Stalin, and as all three ideologies are played out and discussed, we are left wondering which of the three will emerge as the victor and take the Soviet Union forward. Of course, if you already know your history, you will know the outcome.

The year is 1923, Lenin is very ill, he has suffered strokes and goodness knows what else, but on his deathbed, in his dacha outside of Moscow, he recalls fragments of conversations, has discussions with those who are at the dacha fawning over him (or wishing him dead), and the play gives a very real insight into the political manouevres of the time.

The play started excellently. A theatrical dressing-room mirror and a make-up artist arranging one of the cast's hair, whilst in front of this, Trotsky, in period costume addresses the audience, taking us back from the present to the exact period in time he wants us to. He reminds us of certain elements we might need to understand the play, and there is humour in the speech too. I especially enjoyed his calling the Viennese society 'The Schnitzel Socialists' instead of  'Champagne Socialists'. We are taken by Trotsky to the dacha and the people who are present there as well as others who are in the play.. he introduces us to them one by one, meticulously, so that we know who they are and their relationship with Lenin.

The play proper then starts. The set is on a revolve and has rooms within rooms, an outside porch, a bedroom, a bathroom, a dining room etc, all as if it were a real house, meaning that the audience only see what happens on the outside facing them. Above this there is a large screen, and whilst the action on stage takes place a steadycam operator roams the stage filming the action that the audience will have difficulty in seeing so that it appears on the screen above. The idea is that the dacha appears more like a prison and those who are there have little space to negotiate, making the play even more claustrophobic because of it.

The play however, never really gets out of first gear the whole two hours. Ocassionally one of them raises their voice, or walks quicker than a stroll, offering some light relief. The humour has also gone too. Only once or twice are there very brief moments which one could smile at. The idea again to emphasise the ennui that had set in; taking the play almost at real time, it lacks the dramatic, it lacks the theatrical, it's just like a fly-on-the-wall documentary...the world's first Big Brother House with all the boring bits kept in. And to think that the play takes place only over the course of about 12 hours, split into three sections [Morning, Afternoon and Evening]. Historically and politically accurate, interesting, and I indeed did learn quite a lot from watching this play. I loved the authentic-looking costumes and set design (Anton Lukas and Silvie Naunheim), and the lighting was deliberately ominous, brooding, dark, giving the stage an almost sepia quality, which worked well, but for two hours without change, did again, tend to induce boredom on the part of the viewer (me).

There were a few things however, with this production, that I simply did not understand (nothing to do with language - artistic choices). First, I did not understand the casting of Lenin as a woman. (Ursina Lardi). If one is wanting to portray this historical event as accurately as possible, and wanting the audience to emote and sympathise with the unfolding political intrigue, and yet, playing a real historical figure - hailed as The Father Of Communism, is an actress, no matter how well she is able to play the role doesn't fit with the realities in every other aspect of this production... and quite clearly she is female for we see her completely naked being bathed at the beginning of the play... and yet, later on in the play right up to the end, she wears mens clothes, has a moustache and beard and balding hair. Maybe I am missing something and this was a clever metaphor - but I simply just couldn't get passed seeing a naked lady as Lenin! The second query was why some of the cast were speaking Russian and some German. Surely if we are in a dacha just outside of Moscow, and all the characters in the play are either Russian or able to speak Russian in order to converse (in the time the play is set), then the speaking of German should have been sufficient for the audience of Germans in Germany to understand that the play is set in Russia and they would have normally have been speaking Russian. Again, I simply didn't understand the need or reasoning behind this.

My over-riding thoughts on this production are that despite wanting to convey the decaying nature of Lenin through inertia, the pace was too slow for too long, and I did find my mind wandering several times throughout. There was a meditative, refelctive and repetative pace set from the start and it rarely if ever lifted from that. The research that had gone in to the play, in order to try, as accutely as possible, recreate conversations and meetings was highly commendable, and it was also very interesting to learn of the fates of all those involved in the play as a kind of roll-call was read as the play ended.

Sincerely acted throughout by the cast, and it is thanks to their commitment to the production and their roles that I kept coming back to it; otherwise, after my first mind-wandering, I wouldn't have bothered.