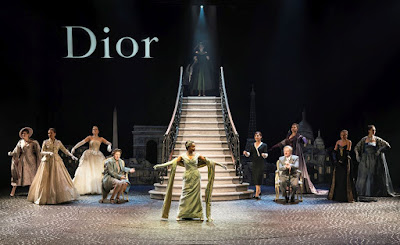 One of the advantages that Coronavirsu lockdown is affording us, is the ability to watch online many stunning theatrical productions from theatres up and down the country that I would never have the opportunity of visiting. Many theatres are offering streamed performances of some of their past seasons' shows, and in return it is hoped that those watching them will donate to the theatre (perhaps the price of a standard ticket) in order that the profession might still have a theatre and producers to come back to once all this is over.

One such production was that of a new (to me at least) Musical called 'Flowers For Mrs. Harris' which premiered in Sheffield in 2016, but was being shown here in its fuller 2018 version at The Chichester Festival Theatre. The musical is based on the novella by Paul Gallico, and the book is written by Rachel Wagstaff, with music and lyrics by Richard Taylor.

The story I could encapsulate into a ten-minute piece of theatre - late 1940s, and a widowed Londoner works as a private cleaner to a varying array of clients; however she has a dream, namely to own a new Christian Dior dress. She tries her luck on the Pools, and after a substantial win, but not enough, she keeps on scrimping and saving until eventually she can afford a return plane ticket to Paris and the dress. She buys the dress, and comes home. This, I think is one of the problems I had with this musical, is that it simply doesn't offer enough in the way of drama, narrative thrust and dynamic. It's a very 'nice' musical.. safe, cosy, feel-good, comfortable. There is no dramatic or cathartic moment (at least not strong enough) to take the viewer on the journey. It might have been different live - I can only hope that it was.

The second problem I had with this musical was that it is essentially a Chamber musical or Fringe Muscial, and as such was dwarfed on their stage. It would have worked better in a small studio space. It does not require a large cast, and the small, but excellent cast used in this production, played multiple roles throughout. It does not require a lavish or complex set. It does not require a large orchestra; in fact it would work just as well with a simple piano accompaniment. The above picture shows the stage as full and as lavish as it ever gets, and this is only because extras are used as models for just one scene in the second act. The musical is also much more in the Off-Broadway style of the later Sondheim shows than the lavish style epitomised by the likes of Boublil / Schonberg and Lloyd-Webber. This is a story, a play essentially, where the dialogue crosses over into recitative and sometimes even further into song; the music being a natural continuation of the spoken word. In this sense there are very few actual musical numbers - ie stand-alone songs - and those that are in the musical do somehow seem a little out of place because of this. There is no big production number, there is no chorus, there is no dancing.

The first act is quite simply, overkill. Boring, long-winded, and the narrative moves at a snail's pace if at all. The second act however is much better. This is set in Paris in Dior's emporium, and as the cast are now required to speak in French there is also more humour in the piece. It is swifter and there are subplots which work, without seeming contrived. Whilst the final scene, back home in London was again even better still. It was such a pity that the musical could not have started and continued from here.

After all that though, I really do have to commend the performers themselves who had invested so much into their roles. They produced powerful, charming, relatable, fully-rounded, recognisable, somewhat sentimental, dramatic, life-affirming characters, peopling this minimalist set, making the whole quite emotional and real. Our protagonist, the pragmatic Mrs. Ada Harris (who we first see chatting to her husband in their kitchen, only to learn in the second scene that her husband died in the war) is played by Clare Burt. I doubt one ever finding a better actress for this role, she has created it and made it her own, and is now the definitive Mrs. Harris. It was a strong, nuanced and perfectly crafted performance. She was sweet, but not saccharine; she was tough, but not leather; and as she gives all those she meets a little advice, helping and looking after everyone else always above herself, it is a character that could all to easily rely on caricature or sympathy, and she relies on neither. She is a strong and likeable character in her own right, and, as my grandad would once have said, she has spunk.

Burt was aided and supported by a very talented array of performers, offering some beautiful cameos (especially in Act 2). But as much as the acting sparkled, it was still a rather uninspiring watch. It's a fantasy story, purporting to be based in reality, but, for me at least, is too far-fetched to be so sadly. It's sugar-coated and life-affirming, and perhaps a good 'weepie' for a certain percentage of the audience of a particular generation. I am extremely happy to have had the opportunity to watch it, but am in no hurry to see it live if and when it ever does return to the stage.

You can watch the production on Vimeo and make your own mind up. The link is available until the 5th May. here : https://www.cft.org.uk/flowers-for-mrs-harris-broadcast