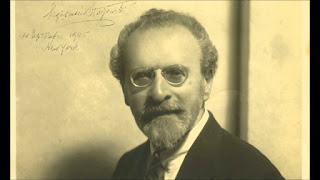 Whilst I have the opportunity to listen to music from composers I have never before come across or new works from already known-to-me composers, I am contiuning to do so, thus broadening my musical knowledge and education. It's quite fascinating.

Today's unknown was the Polish-born pianist and composer Zygmunt Stojowski who lived between 1870 and 1946, spending the last years of his life in America. One assumes that he would have fled Poland to escape the ravages of the war.

The first of the three pieces I listened to on Youtube was his 6 minute-long 'Romance For Violin And Orchestra' (opus 20). In this recording it was The Elsner Music School Orchestra of Warsaw conducted by Piotr Wajrak with the solo violin played by Agnieszka Marucha. I have to say after listening to this piece that the word 'romance' doesn't seem at all suitable. It is an interesting work, but Stojowski doesn't feel at ease with the violin's compositional line, and the melody is mostly at the violin's highest register appearing to screech and jar throughout. In fact the piece is quite unsettling. When one thinks of a piece of music with the title 'Romance' one automatically things of broad, sweeping melodies with lush harmonies; a serenade perhaps or maybe even a lullaby. This was none of that, and built to a dramatic central section which was more frightening than calming.

Feeling rather uninspired by the first piece, I listened further with some trepidation. However, the second piece, his Symphonic Rhapsody For Piano And Orchestra (1898) was much better. I mentioned at the start that Stojowski was not just a composer but a pianist, and here he has found a home for his talent, in his piano composition. This time the orchestra was The Polish Radio Symphony Orchestra conducted by Lukasz Borowicz, with the solo piano being played by Jonathan Plowright.  This piece did take a little while to get into its stride, starting unassumingly with a woodwond introduction before the piano melody. On the whole there are some nice melodies and thematic ideas throughout, highly Late Romantic in its execution, but perhaps it is understandable why this composer has been left on the shelf. There are just so many other pieces of music out there very similar to this, but more emotive, better constructed, etc. There are times when I thought I recognised a fragment of the tune and then realised it was from another work altogether. The relationship between solo instrument and orchestra however is much better marked here than in the first piece and Stojowski's understanding of the piano is obviosuly far superior to that of a violin.  The Mazurka-like central movement of the piece is really very enjoyable, and the rather flashy coda  does mark this piece out as worthy though. Plowright's playing was exceptional.

Thinking that Stojowski perhaps excelled at piano composition more than anything, I then decided to listen to a short piece for solo piano. I was right and pianist Ivan Shemchuck provided me with this opportunity, and the music was 'Chant D'Amour (op 26 no 3). This is a beautifully balanced and truly Romantic piece of writing. It pulls at your heart strings and makes you mush inside. A lovely short tune played with great skill and passion by Shemchuck.