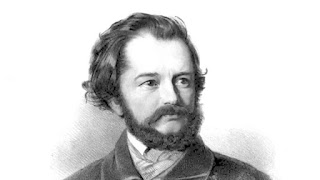 Once again I turned to YouTube to offer me some classical music that was unknown to me, and this time it was the turn of Polish composer Ignacy Feliks Dobrzynski. Born in 1807, Dobrzynski was a class-mate of Chopin at the music school in Warsaw, and indeed in later life helped Chopin with his orchestrations. Here however, he proves to be something of a prodigy himself, both as a pianist and composer, since this 40 minute concerto was written when he was just 17 years old.

In this recording the music is played by The Polish Radio Symphony Orchestra conducted by Lukasz Borowicz. The pianist is Emilian Madey, who has some extremely difficult passages to negotiate, but his skill and talent are superb, and the piano sounds delightful in this recording.

This piano concerto is a masterpiece (and I hardly ever use that word!). The work has obviously taken much inspiration from Mozart, Haydn and Beethoven, and it can be easily forgiven for this; as well as sounding very much like Chopin in many places too, and this is completely understandable since they had the same tutors, lived at the same time, and were life-long friends. However where this concerto scores above all of this is twofold. First, in the quality of the orchestration. It is more mature and more innovative than Chopin's. Second, the concerto was written in 1824, 8 years befoe the official start of classical music's 'Romantic' period; and yet, despite being written in the Classical style, the work is forward-looking and feels much more Romantic than other contemporary works. I could also add a third reason too perhaps, and that being that the relationship between solo instrument and orchestra is considered here to be much more a single unit than the traditional idea of soloist and accompaniment.

The first movement is  bravura in concept and execution. Dramatic, poetic, lyrical and has a programmatic feel to it, speaking of architecture and Polish landscapes through the seasons. It's passionate, elegaic and dynamic. There is only one word apt enough to desxcribe the beautiful second movement, and that is 'sublime'. Whilst the third movement is a long, unending, lively dance. Even the central section to this movement, a piano solo of clever, lyrical and playful storytelling, is a delight. The whole concerto is bright, jolly, full of joy, and mostly full of fun. Fantastic!