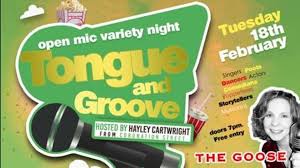 A regular weekly spot at 'The Goose' pub in Manchester, The Tongue And Groove Open-Mic team decided not to let the coronavirus lockdown spoil their fun, and went online last night for their cabaret of variety acts.

Hosted by Hayley Cartwright, who makes a hugely personable and easy compere, the show, despite its virtual nature, kept the same format, and boasted 10 acts, all of whom had performed their routines in their own homes being filmed on webcam, and then through the magic of the internet, we were able to watch these as if they were performing live on The Goose's stage.

There was a surprising variety of performances. Everything from poetry-reading to comedy puppetry, with a saxophone solo to end the show. Interspersed with these short acts (mostly all lasting around 3 minutes) we had a couple of viral messages from local soap opera celebrities, wishing us all well and hoping we stay safe through these unusual times.

The acts themselves all gave their time and talent freely, and it was hoped that those watching would be kind enough to donate some money to them for this, but it was also stressed that these are very trying times for us all, when not only our theatre jobs (which are few and far between and not permanent at the best of times) have been put on hold, but also, many of us have had our regular jobs - the jobs that pay our bills in between our acting contracts - either stopped or furloughed.

The evening started with a young comedian, Jack Kelly, giving us a few pun-full one-liners. My kind of humour completely and so that was a good start! This was followed by the aforementioned comedy puppeteer, Matt Crowther, whose puppets and humour, were in the style of The Muppets. Then came storyteller, Lady Ilaria, with a mock-horror tale of dead gerbils, followed by a self-penned folk styled song with guitar accompaniment by Gabriella. Toni Brookes, in lockdown in London, sent us a video of her reciting a very sweary Cockney poem, 'The Cockney Lament'. Hearing her introduce this poem in her own voice, warm, rounded and cultured tones, made her rendition of the poem all the more hilarious. Cabaret singer Caroline George was next with a Peggy Lee hit, 'Pass Me By', which was followed by a first-timer to the Tongue And Groove shows, Peter Keeley, who performed a monolgue about Grandmaster P.  Next to the 'stage' was comedienne Les Kershaw; however as she is a key worker and was unable to record anything new for the show, so we were shown a clip from her live performance at The Goose last time. The next act was singer Danielle James with her cover of 'Special'. This was professionally filmed with correct lighting and in black and white. It stood out. And, as already mentioned, the evening finished with Amy Rose playing us out as the credits rolled with a mash-up of popular songs on solo saxophone.

The whole event lasted no more than 45 minutes, and was an excellent idea. We all need to try and find ways of keeping the cogs turning, as even when the lockdown is over, the uncertainty of not just our industry but industry in general still hangs very much in the balance. Congratulations to you all, and thanks for sharing your skills with us online. Life is a cabaret my friends!