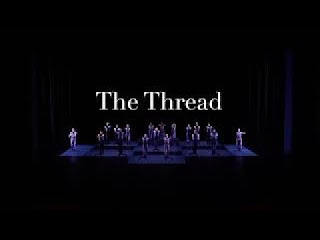 The Thread was given its world premiere performance at London's Sadler's Wells Theatre in 2019, and is a collaboration between composer Vangelis and Sadler's Wells' Associate Asrtist Russell Maliphant. As part of not just Sadler's Wells' commitment, but the industry's in general, to keeping theatre alive by showing previous works online, this was available to watch on YouTube.

The show was a series of individual dances connected only by the thread of the show: (see what I did there?)  that of showcasing Greek dance through the ages in a modern way. When it comes to Greek dancing, then I know probably as much as the common man: slow hypnotic rhythms which build in tempo faster and faster until you can't dance any quicker; long lines of people arms or hands linked and weaving in and out of each other; and of course the occasional plate-smashing! However in this one hour show, we realise that it is so much more than that and it is a part of the Greek culture just as much as fish and chips is for us!

There is no story, there is no linear progression, just a series of dances: some using the whole company, others small groups, others solo performers. The whole starts with a camera placed high above them looking directly down and shows beautiful, symmetrical, flower-like patters the dancers make forming two circles inside each other. It is delightful, and you want more. However the camera brings us back to audience level and we see what the audience would have seen from then on and it isn't anywhere near as interesting. It would have been a wonderful idea to have somehow rigged large mirrors on the stage and angled them in such a way as to enable the audience to simultaneously watch the stage dance and the birds'-eye perspective too.

The stage is bare and the changes in mood and space are created by music and lighting. The lighting is creative and imaginative. However, for the vast majority of the piece the lighting is dark blue or just simply blue. The figures are clear and sharp, despite the obfuscated background. Sometimes, the colour changes to a straw, amber or even gold and we welcome this change like a bee welcomes a stemen full of nectar, but these ambers are too seldom, and there is little or nothing in between the amber and the blue. The lighting marks out the performance areas with military precision, and offers a rather cold blue design or a warm amber, but little else.

Musically however, this piece is just delightful. Vangelis proves once again that he is a genius at composition. His music sounds like genuine ancient traditional Greek dance when it needs to, like a Turkish military war call, or etherial and mystical, or hip and ultra-modern, or dramtaic, or indeed whatever the dance or mood calls for, he is able to produce the exact sound.

The dances themsleves are timeless and universal, transcending country boundaries and identities. We see Greek Gods if we want to or Alexander riding triumphantly back from a campaign if we wish, but it is entirely up to us how we interpret the images. All Maliphant does is create the dance spectacle for us, and we read into it what we will.

It was intricately and meticulously choreographed, and I loved seeing how Greek dance has developed and is still extremely relevant today.