THEATRE REVIEW: Waiting For The Ship To Sail - The Rayne Theatre, Chickenshed, London. 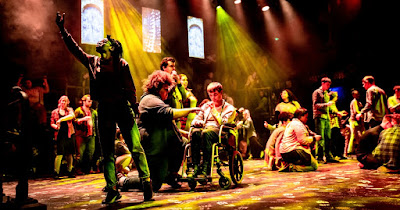 Words like 'timely', 'poignant', 'relevant', and 'messageful' would undoubtedly have been used by this reviewer to express the performance I witnessed on Chickenshed's YouTube channel of the current in-production show which sadly had to be cut short due to the Covid-19 lockdown.  Those words now seem somewhat insignificant as the world has changed immeasurably in the last 2 months. However, in the spirit the show was presented, I shall try and review it as if the virus had not consumed our every thought and action.

Playing at The Rayne Theatre at Chickenshed's home base in London, this was very much a community project. Utilising the largest cast I have ever seen on a studio theatre stage, and they were mostly there all the time, albeit on the periphery, Chickenshed had cast its nets far and wide to amass a company of students, staff, young people, adult community players, a whole mix of what makes up contemporary London. Tellingly, many of the youths in the show were the children or grandchildren of refugees to this country, making the show all the more personal and telling.

'Waiting For The Ship To Sail' is a devised new community Musical, which was created by Chickenshed with original music by Dave Carey (who also played the piano throughout), and directed by Lou Stein. In a nutshell it tells the multiple stories of refugees / immigrants coming into Britain from all the countries that have seen political or religious strife and terror in recent years, as well as those coming in from Eastern Europe to find better lives and better prospects. The Musical is one hour long (and played without interval), and is split into 6 component parts: Home, Relationships, Threat, Escapr, Barriers, Arrivals. More or less the six stages refugees must go through in order to finally arrive in their new home.

Throughout the show the names and fates of many real cases were read out as a kind of roll-call or poignant reminder that this isn't a fantasy, it isn't just a story, but this is real and happening right here, right now.

Using mostly a youthful cast to act, sing and dance their way throguh this show, it felt very 'of the moment', urgent, and although there have been many productions in recent years about refugees and their plight, this production managed to bring about a certian creativity which I have seen before in productions by Manchester's Contact Theatre Youth Company or even The Royal Exchange's Young Company. Stark visuals with an imaginative and colourful lighting design (Andrew Caddies) added greatly to this thinking and the overall feel of the show.

These are stories that need to be told... the world needs to be aware of certain things: a) Why does anyone decide / want to be a migrant in the first place?  b) What sacrifices must they make in order so to do? c) How difficult is it for them to leave their homeland? d) What barriers and dangers do they face whilst making their journey? e) What barriers and difficulties do they face once arriving in the UK?  f) IF they are allowed to stay in the UK, how easy is it for them to be accepted, to assimilate, to find work? to find friendships?. All these themes were explored with realism and sensitivity in this show, and yet it didn't feel like 'overload'. Using imaginative movement sequences and modern choreography helped to make the narrative run smoothly and quickly from moment to moment, and the commitment and intensity of the performers was both sincere and sympathetic.