CONCERT REVIEW: The Hankey Brothers: Gig In The Garden #2 - Warrington. 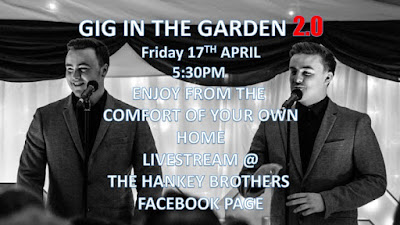 Jake and Josh Hankey are brothers who, during the lockdown are living together in their family home on the outskirts of Warrrington. When life was normal (remember that??) they sang and entertained for a living, and so, in order to keep those cogs turning and in an amazing expression of community spirit the brothers hit upon an idea. If no-one is going to the concert, then the concert must go to them.

One sunny afternoon they lugged their amps, mics and goodness knows what else outside onto their driveway, and whilst livestreaming the event on their Facebook page, they sang and entertained their area. The event proved popular and successful, and so yesterday, they did it again.

I missed it the first time round, but yesterday afternoon the boys came out and entertained - again live streaming on their facebook page - with songs from the pop repertoire. Their down-to-earth and upbeat heart-warming style was a winner form the start.

With songs such as 'Can't Take My Eyes Off You', 'Gold', 'That's Amore', 'Crazy Little Thing Called Love', 'Rock DJ', and 'It's All About You', it proved to be a very popular set which lasted just over 30 minutes. We also heard one song ('Over The Rainbow') by Georgia-May Cox, Josh's girlfriend, which came as a lovely change of dynamic to the concert.

Finishing with 'Dancing In The Street' (which is literally what some of the audience were doing!) we say a huge thanks to the brothers for putting a smile on many people's faces and for keeping us entertianed in a most unique way during these difficult and strange times.

If you want to watch / listen to the concert then I believe it is still available on their Facebook page.