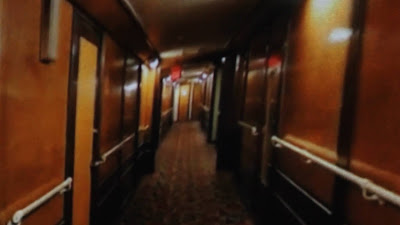 The Dolphin Hotel is a 5 minute short from Massive Owl, filmed in collaboration with Third Angel productions for "The Small Celebrations".

This is Massive Owl 's first experiment in the medium of film, and is inspired by the novel 'Dance Dance Dance' by Haruki Marukami, and was filmed to be the first part of a larger experimental work called 'The Distortion Trilogy'. As a company Massive Owl are a storytelling ensemble who like to find challenging and different ways of experiencing look, sound and feel. In their own words this film is a cinematic work which sits between theatre and live art.

There is no dialogue to the film, but there are two protagonists, a man and a woman. Using unusual non-conventional types of shot as well as distorted lenses, with a soundtrack of ominous chords, the focus goes in and out and the images come thick and fast. From dingy hotel corridors, to noisy elevators, to palm tress and tropical beaches - and of course dolphins.

If there is a narrative / meaning to be gleaned from this pot pourri of experimentation, then it is left to the viewer to fill in most if not all the dots.