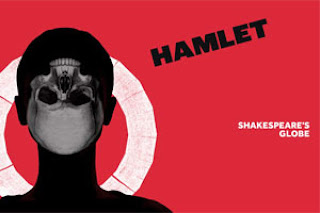 I must admit that the 2018 Globe production of Hamlet, in some ways, left me a bit confused. Shakespeare's Globe is a monument to theatre, and the acting world has seen many great productions grace its boards, and all of the Bard's work! I personally can't imagine the thrill and magic one must feel when treading that stage while the pilars listen to the familiar words you speak. If only those walls could tell you what they had seen, what they had experienced in those long years of theatrical service! And how many arrows they had to suffer from Hamlet's speech.

There have been many actors to take on the principle role of Hamlet and brought something different to the role and I have always been on the lookout for an actor that I can call the 'definitive' Hamlet. I am sorry on this occasion I can't say I have found them. While the show opened strong, Hamlet (Michelle Terry) started strong and powerful and then became like a bitter unhappy teenager. Her performance was notable but she didnt quite 'own it'. Terry's portrayal was that of someone falling into madness, with erratic outbursts, portraying a character caught in grief and instability. This was how Hamlet really should be played as he is spiraling out of control but there's something incredibly confusing about the piece. It feels like each character seems to have more exposure and has more of an ensemble feel to it. Maybe thats why Terry's performance didnt strike me or make an impact as it should, she was somehow subdued.

Horatio (Catrin Arron) was a brilliant portrayal of a character with a level head which contrasted with Terry's act of madness with Hamlet, and you feel sure that they are the only ones who can make sense of it all. I liked the gender swap of characters, which isn't new of course, but I felt they should have done that with all characters, it would have been interesting to see a female Claudio!

Alas, I felt a bit let down by asthetics. There was modern dress next to Elizabeathen and Victorian costume which made me feel like they hadn't thought about where they wanted to set the piece or the message they were sending. Each character wore clothing from different eras. Whenever we do a production with my company, we are careful with what the character's wear as it's all a part of the story. What they wear, why and colour of clothing etc. The problem was I couldn't see that story, that relevance. There was also a scene where you could see Ophelia wearing jeans or joggy bottoms with trainers under the dress which just didnt look right. I can imagine it's very cold on that stage, but surely thermal tights/leggings with some plain black shoes would have been better, it just broke it a bit. And then one character turning up in jeans and t-shirt which felt like someone had won a competition to be in a play. This I am sorry to say felt like it was a case of whatever they have in the costtume department that hasn't been worn in a while will do!

Accessibility was also key in this performance. They included a deaf actor and used sign language in the piece but it was only in the scenes with said actor. I felt it would have been more impactful with full sign, again in my view, if you are to do it, commit fully. Be totally accessible, give all the play away and generate more interest!

It wasn't a bad show: the acting was superb but was not what I expect from Hamlet. It felt like an ensemble piece and it just didnt quite fit for Hamlet. Terry is a brilliant actor and director and I can see that in how this show wanted to come across but I feel in this instance, it was a case of too many cooks.