THEATRE REVIEW: The Phantom Of The Opera - The Royal Albert Hall, London. 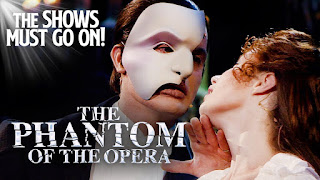 The next Musical in the lockdown musicals-on-our-computer-screens series "The Shows Must Go On" YouTube channel was Lloyd-Webber's 25th Anniversary performance at The Royal Albert Hall of one of his finest musicals, The Phantom Of The Opera.

I was due to see the touring production of Phantom in Manchester at the end of March, but of course, a certain virus put paid to that unfortunately; and so this production came in as a worthy consolation prize for me. This particular show however (due to copyright restrictions),  is only available in the UK until this evening sadly, but the DVD is available to buy.

The Royal Albert Hall is not really a theatre venue, but a music / concert arena primarily, and as such the design team must have had quite a headache in trying to rearrange the stage in a way which would still base itself on the original Hal Prince / Gillian Lynne designs, and yet utilise the venue to its best advantage. I do believe this was admirably achieved. The action was mostly played out on a stage between two grand staircases, and in front of the orchestra who'd be positioned on a raised platform, allowing the area underneath the orchestra to be utilised too. Behind the orchestra, a huge screen and imaginative use of one of the lighting rigs. Even the sides of the venue's balcony seats were used as "Box 5". The iconic underground lake complete with candelabra and boat did not disappoint, but sadly, for whatever reason, it must not have been possible to have had a crashing chandelier. The chandelier was there, and did quite effectively sparkle with pyros at the correct moment, but stayed put, and did not crash onto the stage. The screens were used well, and made up for lack of actual scenery, giving us, amongst others, a very believable graveyard and an opera rooftop scene.

This special production also used a very large cast. This worked superbly, and the ensemble / dancers / chorus were all excellent.  There was also a much larger orchestra than the show would normally accommodate, and, even through my inadequate computer speakers, they, under the direction of Anthony Inglis, sounded wonderful. (even the first trombone!). Costuming was lavish with no expense spared. The close-ups from the camera showed everything in minute detail, and having never seen the costumes in such closeness before, I was both surprised and delighted by their attention to detail.

Everything about this production was lush and lavish. That didn't mean though that it wasn't immaculately directed with excellent use of space (Laurence Connor), nor did it mean that the performers cut any corners, allowing things technical and peripheral mask their inadequecies. Far from it. This production boasted some extremely fine, incredibly nuanced, and sympathetic acting and singing, and not any of the large cast gave less than 100% the entire time. Once again, the advantage of watching on a computer / TV is that we can see things much closer and as the camera focues and zooms in on a particular expression or a small, insignificant gesture, it becomes far more poignant and would have been something that would have gone unnoticed as an audience member.

Ramin Karimloo headed the cast as a very strong and powerful Phantom. His enunciation (especially in the 'Music Of The Night' song) seemed a little odd to me, but I have never seen him perform live, so maybe that was computerised distortion of some sort. I was also able to see (again with close-up) his arm tattoos, which, in my opinion, should not have been visible and have been covered the whole time.  However, he proved to be a very charismatic and engaging performer, and certainly had the vocal power and dexterity to sing the role. Personally I still prefer both Dave Willetts and Michael Crawford in the role.

Sierra Boggess was the best Christine I have ever seen. Vocally en pointe every time and mellow too, even on the highest of notes. Her acting and interaction with both the Phantom and Raoul were excellent, and she truly impressed in every aspect of her studied and incredible performance.

Hadley Fraser made the perfect romantic lead. Another mellow and easy-listening voice which handled the score with accustomed ease. He looked good on stage, and his chemistry with Boggess was excellent.

The rest of the principal roles were all also superbly cast, and worked extremely well with each other. The quasi-comedy duo of Firmin (Barry James) and Andre (Gareth Snook) were most sensibly placed and never descended into true comedy (as I have seen happen!), keeping their roles centred and believable. Madame Giry was the stern-faced Liz Robertson, and Meg, Daisy Maywood. Both of whom made these parts their own. The two stars of the Opera Populaire however, were the two cameo 'stars' in my book. Again, comedy roles, but not laugh-out-loud comedy.. centred, real, balanced and believable, even if they were over-the-top and borderline caricatures. Carlotta was played by Wendy Ferguson, and Piangi was Wynne Evans. For me, Evans had the edge, and his character stood out even when in the background.I could also listen to him singing all day and never tire of it! A hugely enjoyable Piangi.

The Phantom Of The Opera continues to be popular, remaining a true favourite the world over. This is more than probably because it has everything... rock opera, traditional opera, ballet,comedy, ghost story, thriller, romance, Gothic horror, and a whole lot more besides wrapped inside a huge spectacle of a familiar story with swelling emotive music. What's not to like?!

For anyone who has not seen a production of The Phantom Of The Opera, then this one is more than an excellent introduction; however, the thrill of live theatre simply cannot be beaten, so let's hope we can all go back to enjoying it soon!