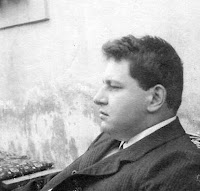 An absolute gem of a find on YouTube for me yesterday when I came across this completely unknown-to-me composer and piece of music. Joseph Marx was born in Graz, Austria in 1882, dying in his home city in 1964. It seems he had a short time of comparative fame, at least in Austria and Germany for both his conducting skills, and his beautiful collection of lieder (songs) - most of which were written for just piano accompaniment. He seems however nowadays to be completely overlooked, which is a shame.

In this particular recording the Romantic Piano Conerto in E major (1919) is played by The Bochum Symphony Orchestra conducted by Steven Sloane, with the piano played by David Lively.

In the early part of the 20th century - around the time of this piece's compostion - there were many composers and 'movements' trying to change, modernify, and the course of classical musical composition was being, as one critic once wrote, "infected with a destructive poison". Marx therefore flew the flag in the face of contemporary compositional thinking and wrote a piano concerto of unrivalled uber-Romantic majesty.  This piece is a peaen, an ode to flamboyant, lush, harmonic, music of epic proportion. Tchaikovsky has often be criticised for "wearing his heart on his sleeve" when it came to his gushing emotively charged melodies and crowded harmonies. Marx licks him into a cocked hat!

The concerto is in three movements - a slower, more gentle minor key movement sandwiched between two grandiose and pompous faster movements. The pianst hardly if ever gets a rest throughout. Unlike many concertos where the solo instrunemt is just that, and can take a little break whilst the orchestra plays, here, the piano playing is almost continuous. Torturously difficult solos come often, but the pianist is also required to play with the orchestra too as a separate instrument in the scoring. Sloane does an inccredible job here, as this piece is a tour-de-force for any pianist, and one can easily hear why it perhaps has been overlooked, as no pianist would wish to tackle it. Crashing consecutive chords combined with phrases full of passing notes with many - perhaps too many - themes. Maybe that is also a criticism we can make of this piece, that it is in general, an expression of Romanticism, and not Romanticism itself, inasmuch as there are too mant ideas left unresolved and there is not really any one melody that leaves an overriding memory of the piece.  Think of Addinsel's Warsaw Concerto, Grieg's piano concerto, and many others, and a melody, a tune immediately springs to mind, even after only one hearing. Not here.. this music is perhaps too densely orchestrated.

That also perhpas, makes this piece not quite as 'Romantic' as we would at first have thought. True, one can liken his style to much of Brahms, Bruckner, Rachmaninov etc, but there is also something of the impressionist style about the work too, and composers such as Respighi, Moszkowski, and Delius spring to mind. There is aslo a definite cinematic quality to the work, with comparisons to composers such as Korngold. I think the work could therefore be clasified as Post-Romantic. Whatever you classify this work as though, it is a sensuous and sensual overload of lush late Post-Romantic harmony and melody.