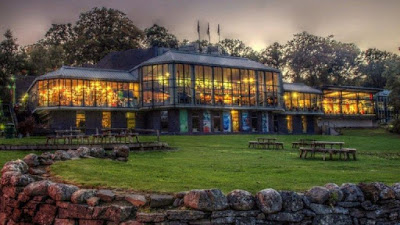 Pitlochry Festival Theatre has today announced the postponement of their Summer Season, prioritising the health and wellbeing of all audiences, artists, and employees during the COVID-19 pandemic. The season, which has been moved to 2021, will be replaced by a series of digital works as part of Shades of Tay. Twenty-five new pieces of writing by playwrights, poets, and performers from Scotland and beyond will be part of #PFTLightHopeJoy, the Theatre’s online series, which was created to respond to the uncertain and isolated world in which we now find ourselves.
These commissions for Shades of Tay, originally announced in late 2019 as an ambitious 3-year project, have been brought forward in response to the need for artists and audiences to be in dialogue during this difficult time.
Inspired by the River Tay and its surrounding landscape, which resides next to the theatre, the work will be performed as audio dramas, podcasts, short films and more by the Theatre’s Summer Season actors including Kirsty Stuart, Richard Standing, Deirdre Davis and John Branwell, and later in a live festival after the Theatre reopens.


Speaking about the project, Pitlochry Festival Theatre Artistic Director Elizabeth Newman said: “The River Tay is 117 miles long. It possesses some of the most spiritual, exciting and inspiring stories. It is the compelling River Highway that everyone crosses at some point. We want this work to respond to the ideas found in this rich landscape, creating a celebration of our shared humanity and how art is wholly and truly inspired by nature.
As we’ve said before, Shades of Tay is our love letter to Scotland. We are so excited about the idea of continuing to write beautiful words about our extraordinary country and its citizens, and this feels like the perfect time to create a space where art can help us celebrate our shared humanity and connect us with how much inspiration, comfort, and rich inspiration can be found in nature. In this time of isolation, we want to continue to share Pitlochry with the world, and the world with Pitlochry.”
With original writing from a wealth of British talent including Timberlake Wertenbaker, Stephen Greenhorn, Abi Zakarian, Hannah Khalil,  Chinonyerem Odimba,  Peter Arnott, Bert Clark, Jo Clifford, Daniel Bye, Olly Emmanuel, Lesley Hart, Hannah Lavery, Jenny Lindsay, Douglas Maxwell, Deborah McAndrew, Nicola McCartney, Martin McCormick, Linda McLean, Michael O’Neill, Frances Poet, Dan Rebellato, Sally Reid, Ellie Stewart, May Sumbwanyambe and Morna Young – and with more artists still to be announced, the work promises to be uplifting, hopeful and embracing in this time of confusion and separation.
Speaking of the project, playwright Timberlake Wertenbaker said: “An enchanted forest and a long river moving through Scotland, it’s already a kind of dream. But the notion of writing something with a forest and a river feels like a magic key in itself.
We need enchantment at the moment: we are living through a time that feels like a curse. And we know that curses and evil spells are most often lifted by a magic word or by a phrase: something we need to learn, or something knew all along but need to remember. Language can break the shackles of the spell, or at the very least, light our way out. “
Released online in the coming weeks, all new works will be captioned, free to access and share, and intended as gifts to those isolated by the COVID-19 pandemic, and those who feel isolated from Theatre in general. Whilst the postponement of the Summer Season is heart breaking, Pitlochry Festival Theatre will use this time to approach commissions, performances, engagement practices and audiences in new, creative, and inclusive ways.
Pitlochry Festival Theatre’s summer season, now postponed to summer 2021, includes Gypsy, Private Lives, Kiss Me Quickstep, Cat on a Hot Tin Roof, the UK stage premiere of David Greig’s new play Adventures of the Painted People, and Frances Poet’s new adaptation of Sense and Sensibility. New dates can be found in the notes to editors below.
Call the Box Office team on 01796 484626 or go online at www.pitlochryfestivaltheatre.com
Source: The Theatre Weekly.
at April 07, 2020