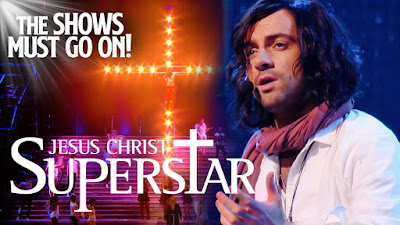 The second of a series titled "The Shows Must Go On" [last week being Lloyd-Webber's Joseph And The Amazing Technicolor Dreamcoat], are a short series of musicals shown online each successive Friday evening and available for 48 hours thereafter to watch at home during the lockdown. They are professionally filmed recordings of stage shows, with the hope that people will accept the government's advice on staying home so they are able to watch these theatre productions, and that they also might, since al our theatres are closed and no-one in the industry is being paid, be able to generate a little much needed cash by way of a donation for being able to watch these first class all-star musicals.

This one, Jesus Christ Superstar, was filmed at The O2 Arena in London as part of a UK-wide arena tour in 2012. Perhaps a review then feels a little out of date, but, that is not the case. The music and performing was as fresh and alive on screen this evening as it would undoubtedly have been what is now some 8 years' ago! I seem to remember at the time that most reviews of this show were less than favourable, but since I didn't see it myself, and am watching the filmed version for the first time, then  hopefully I will have something  a little different to say about this production.

It was big, it was bold and it was certainly brash; and yes, it "brought the musical home" so to speak, inasmuch as it was performed in a venue, to a scale, and with the orchestrations, that were the original intents of composers Rice and Lloyd-Webber. However, since the show's long run on the West End in the 1970s, the show, and the times, have changed - not always for the better - but as such, the way we look at Musicals in general, and the way we see our world has changed immeasurably since the heady days of 1970's Rock. I therefore wondered a little just what was to be gained by trying to recapture that feeling in such a huge arena setting. And I have the distinct feeling that watching it on screen in the comfort of my own home being able to control the volume levels myself might well have been far more enjoyable than being subjected to the amplified screeches and screamings live.

The huge space was set with a large and long staircase with the band placed in semi-cages either side, whilst the staircase itself involved hydraulics, trap doors and goodness-knows what else in an attempt to change scenes smoothly and visually satisfyingly. Some of these ideas worked better than others, although having Jesus strapped to a chair reminiscent of the barber's chair in Sweeney Todd duing his scene with Caiaphus was odd to say the least. The FX, LX and SFX were spectacular though. Well, one would have been disappointed if they hadn't have been on such a high profile and large scale show. The cross itself at the end was of course the showpiece, but for me the cleverest and most poignant tableau was Judas hanging himself on a tree in silhouette at the rear of the stage in what passed for silence in this production. I have to say that that really did give me goosebumps.

The direction, by Laurence Connor, was a little obfuscated by his trying to update the show to modern times. The chorus and disciples dressed in something like a cross between hippies and eco-warriors felt very much more retro than contemporary, Having the priests and King's entourage in grey suits and business attire did little to assuage. But the mixed messages didn't end there. We are in Rome, and yet we have modern day London constabulary riot police, Che Guevara styled posters [Simon even wears a Che Guevara T-shirt], and Jesus enters for his final scene (the 39 lashes) in an orange Guantanamo Bay jump suit! A huge screen to the rear of the stage acts as both an extension to the set, projecting images of buildings, adding a sense of place, and also as a huge TV monitor to show the casts' text messages, online chats, CCTV camera footage, newsreel, etc. making it a little like an updating of  '1984'.

An unknown to me (but my research tells me that he was the winner of a telent contest specifically to play this role) Ben Forster heads the cast as Jesus. He is fairly ineffective and fails to sparkle. Giving him the benefit of the doubt, then he could have exuded much more live, but on screen his interpretation was flat and monodimensional. He did prove able to hit the high screeching notes required for the role though. Melanie C (of 'The Spice Girls' fame) was Mary Magdelene. Again, there was very little in the way of acting from her too. She seems almost resigned to her and Jesus' fate. Tattooed and tarty, with dreadlocked hair complete with feathers, she was a less than conventional Mary (despite the notion that she was a prostitute), but her deportment gave little away and her onstage chemistry with Forster lacking. That being said though, there were four superb performances on stage here. The first was the surprsing casting of Tim Minchin as Judas. Is there nothing that this man can't do? Not only is he one of our better known and loved comedians, he is also an excellent musician, composer of a West End hit musical in his own right too, and now, proved beyond doubt that he is also capable of wowing me and audiences alike with his stunning portrayal of Judas. The cameras for the filmed version were able to get some close-ups of Minchin which would not have been available to the arena crowds, and his commitment and characterisation were flawless.

Another surprise came in the form of casting a radio DJ (Chris Moyles) as King Herod. Dressed in red velvet and interviewing Jesus on a TV talk show was a lovely idea, fitting in with the theme of "celebrity over integrity" which ran through the production. Having The Temple as a seedy 'anything goes' nightclub was a nice touch for example. The two roles though which were cast from trained and 'time-served' professionals proved to be the most grounded and watchable of the production. Alex Hanson's thoughtful and very real Pilate and Pete Gallagher's deep-voiced Caiaphas were both spine-chillingly excellent.

I have seen countless productions of J C Superstar in my time, from children's productions in musty school halls, to full scale UK tours, yet this, the one which should perhaps have stood out as the 'pinnacle' of Superstars was a mixed-messaged show sitting somewhere between Rock concert and contemporary Passion play. That being said, I still enjoyed it and it is most definitely worth watching if you haven't already seen the tour. The link - YouTube is available until Sunday evening.