NEWS: Hunt And Darton go online with a new version of local radio. 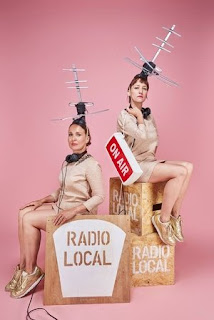 Despite COVID 19 the show still goes on. Innovative performance duo Hunt & Darton will be delivering their upbeat show, Radio Local, digitally over the 17 days the Norwich & Norfolk Festival would have run and thereafter in various London neighbourhoods over the summer. Whereas previously they would have approached people on the street for local stories, from the charmingly mundane to the quite extraordinary, to reflect the current situation they have moved the hunt for stories and content online, using online notice boards and chatrooms. The daily hour-long show will celebrate everything about what it means to be local and will be built with, by and for residents of Norfolk and London respectively.
Stringent budgets and an ever-increasing centralisation of the media have led to a devastating demise in support for local radio, with tens of local shows closing their networks earlier this year. Hunt & Darton will gather stories from Norfolk to create their shows, partnering with local radio stations. They may not be able to strap aerials to their heads and venture into local communities, but that will not stop them assembling tales from far and wide, highlighting activity local to their guests and what their area means to them. This new format aims to be a pocket of positivity for disappointed theatregoers unable to attend live performance in these challenging times.
In partnership with Norfolk & Norwich Festival Hunt & Darton will present Radio Local, merging content and participation whilst hearing from acts that would have taken place, through live performance, guest presenters including Victoria Melody who will be investigating the world of amateur stand-up comedy in Norfolk and interviews; and signposting digital content from programmed artists. They’ll also be commissioning artists to create content for broadcast, including Lucia Scazzocchio who will be creating Audio Postcards from Great Yarmouth.
Following the Norwich & Norfolk Festival, Radio Local will get hyper-local in London, broadcasting from the Barbican and Golden Lane estates in partnership with Culture Mile – the City of London’s culture district. Featuring guests Scottee and Bourgeois and Maurice, further details to be confirmed.
Full schedules will be unveiled at http://www.radiolocal.co.uk/
Drawing on their signature deadpan, playful and inclusive approach, Hunt & Darton will turn regular radio features into a series of absurd games: news bulletins? Local residents divulge anything from DIY successes to family births. Restaurant reviews? Giving Hunt & Darton plenty of time to compile a long list of must-eats before the return of business as usual. Agony aunt? Strangers share their problems in a kind, supportive environment.
Jenny Hunt and Holly Darton said “We feel privileged to have found a way to carry on making work in this adverse time. Radio is a superpower. We are ridiculously excited to still be able make this show with you all from our homes and show off some wonderful local communities, commission some great artists and share our collective experiences in this bizarre time. We feel more than ever the need to keep communities connected and to offer some light relief to people stuck at home. We cannot wait to collaborate with you- let’s make some art, let's make radio!”
Hunt & Darton is a 10-year old collaborative practice between artists Jenny Hunt and Holly Darton, who both studied Fine Art at Central Saint Martins. Hunt & Darton make work that embraces the ordinary as extraordinary; they replicate, borrow, reframe and reclaim social space, facilitating ambitious public Art that responsibly establishes itself as part of its new home. Committed to creating live work that playfully interrogates definitions of ‘local’, they blur distinctions between conceptual and community space and take ‘public engagement for starters and not as side dish.’ Hunt & Darton are the creators of the Three Weeks Editor award-winning Hunt & Darton Café, a pop-up interactive performance/installation and fully-functioning café. For a Circulate commission they created The Punch, The Sandwich, The Cake, an outdoor show for families. In 2014/15 they also toured a full-length theatre show titled Boredom to the Edinburgh Festival Fringe and venues across the UK. They have since developed and toured Radio Local to town squares, parks and more remote locations across the UK. Hunt & Darton are associate artists at Cambridge Junction.

8 to 24 May      Norfolk and Norwich Festival
Details at nnfestival.org.uk
3pm – 4pm I Broadcast on Future Radio http://futureradio.co.uk/
Highlights will be repeated on BBC Radio Norfolk Monday – Friday.