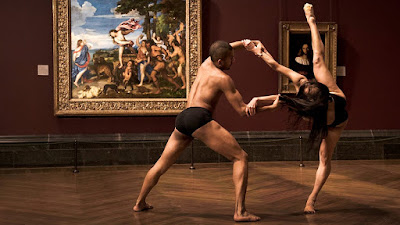 A short, 30 minute dance-film using multi-media as part of a series under the title, "Performance Live" recorded for the BBC and currently available to view on BBC iPlayer. This production was filmed in both The National Gallery in London and in the Llechwedd Slate Caverns in Blaenau Festiniog in North Wales, and utilised not only dancers from The Wayne McGregor company, but other guest dancers too, as well as a performance poet, Isaiah Hull; a cellist, playing his original music, Tunde Jegede; and a pianist (playing Beethoven), Johanna MacGregor.

The film was in two parts, "Awaken" and "Return" although, unless these titles had been shown to us, we would have been none the wiser. The film is advertised as a journey through the gallery rooms and a mystery cavern in a story about exodus and redemption. An evacuee painting struggles on returning to it's home, and the work aims to both help to protect and bring about an awareness of our cultural heritage in order to keep it safe in times of world violence and conflict.

Watching it, these themes were not apparent, only subliminal after having read the intro. However, the dancing was innovative and creative, with some parts intricate modern pas-de-deuxs with attention given to every single slight muscle movement, whilst others were more hip-hop / street dance in nature. Totrured solos pitted against energetic ensemble work gave inner-meaning to the piece, but the meaning could be interpreted a million different ways.

The dancers not from Wayne McGregor's Dance Company were from Company Bonetics, Company Far From The Norm, and dancer Botis Seva. The whole was written and directed by Robin Friend and choreographed by Wayne McGregor.