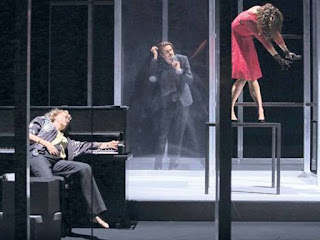 This evening I tested myself, and watched a German language production without subtitles. It has been a decade since I lived in Austria, and the phrase "if you don't use it, you lose it!" was ringing in my head. It was about time I made a conscious effort to listen to some German again before I did indeed lose my fluency in the language. [admittedly Austrian German and Berlin German are two completely separate kettles of fish - a little like putting a Glaswegian with a Cornishman and then some - but hopefully...] Fortunately, for the most part, they spoke in what passed for "Hoch Deutsch", and the longer I watched the easier I found myself immersing into the production and not thinking or worrying about language.

Berlin's Schaubuehne is in the centre of the city on the Kurfuerstendamm, and is very highly regarded not just in Berlin but Germany-wide. This particular production 'Never Forever' (and yes, it was given an English title) was premiered at their theatre in September 2014. The play is the result of improvistion and devising by the company and their director Falk Richter during the rehearsal process with the final script being written by Richter. I imagine it being written in a similar way Mike Leigh wrote 'Abigail's Party'.  Add on to this a second layer of contemporary dancers from Total Brutal and choreographed by their company director, Nir De Volff, and the play suddenly takes on a whole new style of performance entirely.

The stage is black and sparce with bright metal bars, angular and accusatory, standing around the three sides marking out different areas, rooms. spaces, and this along with a few black chairs formed the base of the set. It was stark, bold, clinical, black and silver, unfurnished, very German. The lighting aided this minimalism with very unsubtle and brutal changes using mostly steel lighting throughout, making the experience of watching rather cold and impersonal. Further enhanced by eerie sounds and strange music throughout, mirroring the on-stage actions excellently.

The modern style of theatrical presentation  complemented this design. Using a style of theatre which is becoming more and more popular in this country, although it has been being performed in Northern Europe for considerably longer and better: we know it as "Contemporary Performance (Practice)" and uses several different styles of theatre, mostly non-naturalistic, to tell the story. In this particular play such things as metatheatre, docu-theatre, postmodernism, symbolism and a mixture between microphone and natural vocals were used as well as other ideas too, and combined with the frenetic gyrations of the contemporary dancers, it became also a piece of dance-theatre. I have to admit that it is not a style of theatre that I am either particularly at ease with nor know much about. All I can say is that everyone involved on the stage was completely compelling and totally committed in their roles. It wasn't that I wasn't fascinated by their stories, I was; nor was it that I wasn't enjoying the performance, I did. More that the actual style of presentation is still (no matter how many productions I see use this modern style) unable to make me emote and feel in the same way as I would have done had there been a more naturalistic linear narrative style to the performance.

The story was one of angst, despair, longing; a search for hedonism, but never fully reaching it. The actors took turns to tell their own story (a monologue spoken through the microphone usually) whilst the rest of the company interpreted that story. There seemed to be an overriding need in all the cast to find a 'meaning' or even just to 'feel alive' and they all seemd prepared to go to extraordinary lenghts to do and justify both. The metatheatricality of the play meant that one could ask, "Am I alive? Or am I just an actor in a play?!" There is a self-realisation there, but a kind of dual-personality that doesn't allow the normal persona a voice, instead becoming angst-ridden, madmen, scoffing at all around them in their search for their idea of hedonism. They wish to exist even beyond the world of their own bloated social media profiles and webcam chats; They shout loudly for an existence beyond all of this, and yet, when it is offered to them,, they shy away from it like scared children.

Mostly the dancers mirrored the moods of the actors, but at times worked in juxtaposition to them offering two non-complementary ideas to the same thought. I found this most interesting, as in real life, two completely unrelated emotions can exist in the one person at the same time.  "Verlass mich nicht. Ich hasse dich!" declares one character.

As the play progresses and the mixture between quasi-normality and the fantasy become more blurred, the characters start to talk of death. [* I have to admit to being a litle confused here - since the word for death ('tod') can be used literally and can also be used idiomatically to mean 'completely drunk' - and since one of the actors did seem to be drunk, it could have meant either - or maybe even both]. But it did open a question in my mind as to whether the characters were alive or not. They were calling one of them 'mother', and she denied being their mother.. she didn't have any children.. they had died several years earlier..... - and this brought the question to my mind again.

There seemed to be a force, a spirit if you will, taking over, taking control of them in their search for ultimate pleasure, but when that evil spirit became too strong they used their social media profiles as a cry for help. But we never truly saw the consequences of their search - unless of course it was all allegorical and they are all dead. (?)

"Wer bist du?" repeated one of the actors ad infinitum towards the end of the play. This could perhaps be replaced by "Wer bin ich?" or even "Wer sind wir?". - "Was haben wir alle hier gemacht?!"

Sadly, I can't put a name to any of the actors' characters, but 'mother' - the older actress with ginger hair did impress me the most as I found her acting the most synpathetic and relatable. However, I can list the entire cast, and they were: Florian Bilbao, Katharina Maschenka-Horn, Johanna Lemke, Ilse Ritter, Chris Sicherer, kay Bartholomaus-Schulze, Tilman Strauss, and Regina Zimmermann.