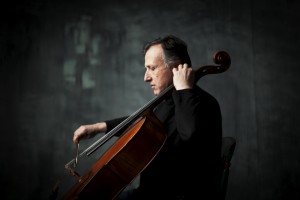 This evening I sat down to enjoy a concert of classical music which was being streamed online by The Northern Chamber Orchestra on YouTube. It was a recording of a concert they performed last November at The Stoller Hall in Manchester with guest cellist Raphael Wallfisch.

Number 9 reviewed the concert at that time, and after re-reading Aaron Loughrey's brilliant account of the concert, I find it almost impossible to either disagree with anything he writes or find anything new to add.

Four pieces were played in total, with Wallfisch taking the solo cello part in the central two. The one thing I found the most amazing and inspiring about this concert was that the chamber orchestra (which kept adding or subtracting players for each piece) was not a large ensemble, but nevertheless was large enough to warrant a conductor. However, they played all four pieces, considerably difficult pieces which would normally have been conducted, with just the orchestra leader making the odd gesture with his bow to keep time when he himself wasn't playing. The amount of rehearsal necessary for this, and the trust and bond between the players for this to happen must be immense and I salute them all.

The leader introduced each piece briefly and his insights were intersting and personal, adding to our aural enjoyment.

The orchestra started with Holst's St. Paul's Suite; a seemingly quite simplistic piece of tuneful writing, but it is deceptive and can often go awry... not here! The balance in dynamics throughout this 4 movement suite were excellent.

The second piece was Weinberg's Cello Concerto (op42). When peforming this live in November it was the UK premiere performance of the work, and Raphael Wallfisch absolutely smashed it! The piece is about 16 minutes long is much more lyrical than I had expected. Given his association with Shostakovich, and his being hounded by the USSR Government in much the same way Shostakovich was, I expected it to be much more modernistic in its scoring. It is actually a very beautiful piece of music and full of hope, lively folk dance music, including a high-spirited Klezmer passage. The solo cello cadenza is more along the lines of what I expected the entire work to sound like, but even that, in its place here, sounds more like weeping and sadness than antagonism, and it leads into a serene, quiet and almost pleading final few notes.

The third piece was Tchaikovsky, and his Rococo Variations for cello and orchestra, Again Wallfisch played these notoriously difficult variations with panache and passion. The cello part here is one for virtuosos only. However, in our introduction to this piece we were informed that there are two extant versions of the Rococo Variations. Writing the work for his friend and cellist Wilhelm Fitzenhagen, he was advised / asked by Fitzenhagen to alter some of the passages and to rearrange the order of the variations. Surprisingly Tchaikovsky did so, and that is the version that is more often played today. However, here, the NCO played Tchaikovsky's original scoring of the work.. pre Fitzenhagen. Tchaikobsky's love and admiration of Mozart is obvious in this work, written very much in the Classcial style and in homage to his muse. Wallfisch makes the difficult cello part sound easy and the clarity of line, superb.

The concert finished with Schubert's 5th Symphony. This symphony was written when he was 18 years old, and is his only synmphony to be scored for a lighter chamber orchestra, omitting clarinets and timpani. It is a bright and jolly Classical romp, and even though much of the score is marked 'pp' (ie: to be played very quietly), it was a rousing and fitting finish to the concert, played by an exceedingly talented chamber orchestra with a maestro guest soloist. Thank you NCO for agreeing to stream the concert during these strange times of uncertainty.