THEATRE REVIEW: Only The Brave - The Wales Millennium Centre, Cardiff. 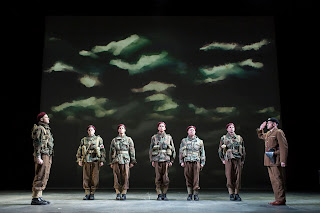 Over the last few years there have been many pieces of theatre - both new writing and published - about war; especially the First World War as we commemorated that historical event's centenary not too long ago. War, and the heroics thereof, have always been a common and popular theme for artistic expression from Greek tragedy to Hollywood blockbuster, and so producing a brand new Musical about a real event in the Second World War might seem, a little like the mission these men were sent on, to be a suicide mission. Starting life at Edinburgh Fringe Festival in 2008, and grown and developed into what I watched online - Coronavirus lockdown free of charge screening on Vimeo - the April 2016 production at The Wales Millennium Centre in Cardiff, it has proved to be anything but a suicide mission, and indeed, like the heroes the musical glorifies and commemorates, the Musical itself is nothing short of triumphant.

Written by Rachel Wagstaff (book), Matthew Brind (music) and Steve Marmion (lyrics), and also directed by Marmion, this Musical tells the true story of a small company of men who are tasked with entering occupied French territory to take The Benouville Bridge prior to the D-Day landings. It was a dangerous mission, but one which, if successful, would be vital in delaying the German response to the allied landings, as the bridge was the only river crossing point for miles in both directions. Intertwined with the story of the men are two others. First is the story of the women, wives, families the men leave behind; in particular the wives of our two protagonists, bringing a very human and relatable element into the narrative. Whilst the second concerns a young 18 year old girl who joins the resistance and for her first mission is to report on the German activity on and around the bridge.

The set design (Michael Vale) was the one thing in this production which didn't immediately grab me. In fact, it was stopping me from enjoying the musical and so I turned it off, and came back to it later (something I had the ability to do under the current circumstances but obviously would have been unable to do live). It was minimalist, and repetitive, and could see that design working well for the Eduinburgh Fringe, but would have expected more for the full production in Cardiff. However, the more I watched, and the more I immersed myself in the show, the more I understood the concept, accepted it and conceded that it did work. That is not to say I became a fan, just that it worked in context. However the costumes all looked and felt authentic, and a huge screen at the rear of the stage was used to excellent effect. Although I have to say that I am now fed up with companies using rear screens and relying on technology to make the sets for them. I have seen oh so many shows, both plays and musicals in recent years where a screen has now become de rigeur and it becomes wearisome. Here however, it did add to the minimalness of the stage, and with real archive photos did add excellent context to this story. It was also imperitive for the swift-changing nature of the scenes and multi-layering of two or more scenes playing at the same time. Dick Straker should be commended for this.

The first act is all about setting up and training for the mission back in England, whilst the second act starts with the men in their glider preparing to crashland by the bridge. Director Steve Marmion cleverly allows more than one story to unfold at the same time with clever use of the stage, and the short scenes and fast pace of the musical never really seems to let up, even in the more dramatic and quieter moments. And several sacrifies and tragedies later and the mission is declared a success, we realise that it has long-lasting and heart-breaking consequences for all those involved. To use the trite phrase "emotional rollercoaster" simply wouldn't be out of place here; as the emotive quality of this production is high and raw. I don't mind admitting to having tears in my eyes at least a couple of times during the show.

This is due, not only to the excellent writing skills of the composing team, but also to the quality of the cast. Without doubt David Thaxton as John Howard and Neil McDermott as Denholm Brotheridge were outstanding, bringing not just a gritty realism to their lives and situation but a humane and personal realism too. Their respectives wives, played by Caroline Sheen and Emilie Fleming were also superb. The denouement to the first act which saw them travel to their husbands' last night party before flying out on the mission the following day, contiunuing to the end of the act (including the Band Of Brothers song) saw some of the finest and most emotional acting I have ever seen in Muscial Theatre. A special mention to Nikki Mae who portrayed the young Reisitance spy Isabelle with such earnestness, but indeed the whole cast were beyond reproach.

Greg Arrowsmith's Musical Direction was magical, Alistair David's choreography was imaginative but grounded in realism and worked superbly, whilst the LX and SFX (Malcolm Rippeth) truly added to the whole and made me believe the stage to be the Benouville Bridge under mortar fire.

The final few minutes of the Musical was devoted to narrating the true histories of those persons portrayed, and how they survived, lived etc after the war. This was both informative and levelling, but perhaps the most touching idea was to have a real war veteran portray an older John Howard both at the beginning and end of the show, and the cast in unison raise their salute, not to the audience, but to him.

Set design notwithstanding, this was a first class musical, delivered by a first class team, and I would dearly love to be able to watch it live one day.