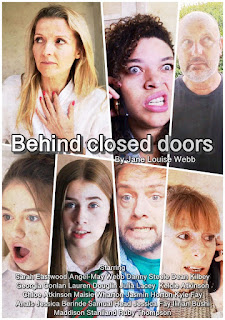 Just because all the actors, directors, and creatives of all kinds have been, like everyone else, shut in their own homes for a month now, doesn't mean to say that they aren't being productive and pragmatic about the situation. One such company, A leap Of Faith Films, has decided to produce an online sitcom. How is this possible I hear you ask? Each performer acts their lines in isolation and is videoed. The whole is then edited and montaged in suc ha way as to make it look (almost) as if they were all acting together. It's a clever idea, and works surprisingly well.

As a 10 minute taster, the opening episode, which sets the scene hilariously, is available to watch on Youtube. I am assuming the whole series will eventually be uploaded but not certain when.

In the opener, a teenage schoolgirl arrives home from school. Her mum however happens to be in bed with a lover, and in order her daughter doesn't find out, goes to some lengths to try and avoid the situation. However, at almost the same moment the local handyman turns up to fix a couple of jobs, and her lover's mum phones him to ask him what he wants for tea! The daughter has online chats with her friends about homework and stuff, whilst her mum gets a phone call from one of her friends saying she is coming round to pick up a dress.....!! Will her lover manage to leave the house unseen? Will she get away with it? And what of all the gossip from her daughter and her friends.. is there more to that than just chit-chat?

It's a great set-up, and as the words "To Be Continued" come across the screen, it leaves you on a lovely cliffhanger hungry for more.

The series is written and produced by Jane Louise Webb, and the first episode starred Angel-May Webb as Beth, Sarah Eastwood as Sadie, Danny Steele as Greg, and Dean Kilbey as Rob.