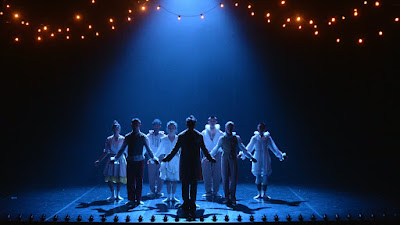 Any work by Hofesh Shechter is exciting and both aurally and visually satisfying. Shechter is without doubt one of the UK's most innovative and exciting creatives in the industry today, and this 30 minute piece which was filmed at The Rivoli Ballroom in London was absolutely no exception.

Taking his inspiration from clowns (as the name of the piece might suggest!), he pushes the boundaries of human emotion and asks, how far would one go in the name of entertainment?! Of course, all the trademarks of Shechter's choereography are there in abundance.. 1) the inclusion of folk and traditional dance moves, in particular here the pas-de-basque with arms in the form of the stag - a very Scottish move seen in many traditional Scottish folk dances as well as The Sword Dance. 2) the long repetitive themes both musically and actually, repeating a movement for as long as possible before it simply has to change. 3) Shechter's Jewish heritage, both again in the music he writes for his shows and in the dance moves, there is always at least one section which has a very klezmer / Yiddish feel to it. 4) The conflict, the killing, the death. I have yet to see a Shechter dance show that doesn't have the cast murdering each other bloodthirstily at one or more points within the show. Here was hardly an exception, in fact it became so commonplace at one point, with so many different ways found to kill someone, that it became funny, not grotesque or horrific, but I actually found myself laughing, quite loudly, and I imagine that is exactly what Shechter would have wanted me to have been doing.

Other things about Shechter's pieces also strike me. One being how important the small nuances are. In many choreographies, the dances make large sweeping gestures, or make balletic leaps in abundance. Shechter however tends to concntrate on much smaller but just as important aspects of dance. The clicking of the fingers, the slight movement of the wrist, the small nods of the head etc, and when these are done with the full company standing still and in unison they become very effective and powerful.

As I have already mentioned, Shechter also composes his own original scores for his company, and again, certain elements in his compositional style are omnipresent. A continous rumbling drum-beat, a relentless rhythm, wordless vocals, a starting off quietly and insignificantly building through a huge crescendo to something much louder than one would normally listen to music. In this piece the rumbling drum rhythm was a march beat which had a brief respite 13 minutes into the piece only to be quickly restarted again right up until the end. Although the end does finish on a whimper and not as you might have expected in a huge fortissimo blaze. It is a bit of a murderoulsy surprise ending too, not to spoil it too much.

The other aspect of any Shechter dance piece is his relationship with and his use of lighting. It must be a lighting designer's heaven working with Shechter. He understands colours, effects, moods and their aesthetics better than any other choroegrapher I have eevr come across. Always imaginative, always perfect, always changing and surprising, but always meaningful and pertinent.

These ten multi-talented dancers perform their grotesqueries - masquerading perhaps as ringmaster and circus performers (hence the clowns), but they show mankind up for what we really are: on the surface all is calm, polite obedient and model citizens - just as the start of this dance presentation shows us a perfect line-up of perfect beings - but under the surface we descend into the depths of our more ugly emotions - just as these ten dancers do, contort themselves, prostitute themselves, and ultimately kill themselves for not just their pleasure but for ours as well. It is a piece of dance-theatre rather than just a dance, in the sense that the whole is dramatic although there is no linear narrative to the dance, it is based on ideas, themes. It doesn't tell a story, rather creates thousands of stories. Shechter's work needs to be seen to be understood, but they are always a unique and all-encompassing spectacle for the senses, using dancers that he knows and has worked with previously building up a beautiful trust / relationship between artist and creator.