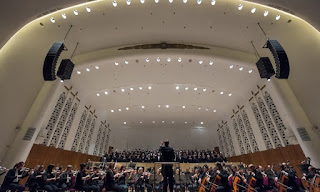 During this time of lockdown, we are privileged to be able to hear recordings of previous concerts from orchestras we may not necessarily have the opportunity of seeing play live, as they offer these either on their own websites (as here) or on their YouTube channels.

In this instance the three works I listened to was a composite concert especially for now, as the pieces were all taken from three different concerts given over the last few years, all at The Philharmonic Hall, all played by the Liverpool Philharmonic Orchestra and all conducted by Vasily Petrenka.

Grieg is one of my favourite composers - I am a true Romantic at heart! And Grieg's music is always lyrical, sweeping, emotive, and he is definitely not afriad of wearing his heart on his sleeve. Here he combines this with his love of Norway and folk music, as we heard his Symphonic Dances on Norwegian Themes (opus 64) written in 1897.The work was originally written for piano 4 hands, but nothing beats an orchestra to bring out all the dynamics and nuances of the piece. Written in four movements, and full of character, with an almost cinematic approach to the writing (especially in the final movement), the work is littered with traditional Norwegian themes and rhythms from different parts of Norway. Most notably there is a 'Halling' or two in there, which is a highly energetic folk dance where the men leap about wildly; a 'Vårdans' (Spring Dance) from the Åmot region, and a wedding song from the Valdres region.

The second piece was Ravel's Piano Concerto in G major. This is a crazy and confusing work, but somehow, it all seems to come together and work, despite Ravel throwing pretty much everything he had in his arsenal at it. Written between 1929 and 1931and lasting just over half an hour, it is a microcosm of all that Ravel was and stood for at that time. The work is infused throughout with jazz; the ideas, the idioms, the harmonies are based on jazz which he brought back with him after a visit to the USA. The concerto is in three movements. It starts with, most surprisingly, a whip crack and a drum roll! This movement is rather confusing and a hotch-potch of thematic ideas. How many times are you likely to hear a piece of music which combines a traditional Basque folk melody with American Blues?!. Moments of fast, loud passages though do eventually give way to the unbelievably beautiful second movement. The opening tranquil passage for solo piano is one of the most beautiful melodies ever written for piano concerto. It's almost, but not quite, a waltz. It's almost, but not quite, a lament. A flute joins in eventually carrying the movement to another place, another melody - deliberately a little jarring without losing its beauty or line before the first theme returns again to end the movement. The final presto is a very short movement (4 minutes) and is loud, sometimes dissonant, flourishful, and again another mixed bag as it gallops its way to the end of the score using the same four chords with which it began.

For this concerto the solo piano was played with ebullience and skill by Simon Trpceski, who had a lovely connection to the piece and the piano.

The third and final piece in this online concert was Sibelius's Symphony no 5 (opus 82). What can I say about my all-time favourite symphony? I could eulogise to my heart's content about the wonderful, evocative, lyrical, sweeping, Romantic, dramatic, programmatic, thickly-scored writing, the evocative and non-traditional style, the emotional journey I take on each listening, or the emotional journey Sibelius himself made when composing, just having recovered from both near financial ruin and illness, and being given the good news that he had not, as he had originally thought, got cancer. Perhaps this is why the symphony strikes one as being full of hope and written, unusually for Sibelius, entirely in the major keys. I could compare and contrast this piece with other works by Sibelius or other composers who have influenced his composition or have been influenced by it; I could indicate the parts of the score where Sibelius uses fragments of both Finnish and Karelian folk music, and where he takes inspiration from his hometown and the Karelian landscape. But I'm not going to do any of that! Instead just find the recording and play it for yourself! The coda, with it's strident relentless patriotic melody leading to the final series of chords with long pauses between is just spine-tingling brilliant and gets me every time!

Thank you Royal Liverpool Philharmonic Orchestra for your generosity at providing these first class recordings of your concerts. Living in Manchester I am spoiled having The Halle on my doorstep, but when this virus pandemic is all over I shall make a concerted effort to come along and watch you perform live. Bravo!