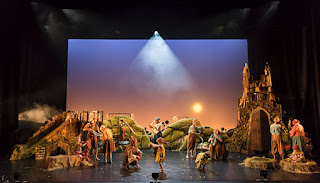 In a co-production between Sadler's Wells and Northern Stage, and filmed by The Space, this was a rather delightful production by BalletLORENT, of the children's folk tale of Rumpelstiltskin.

I have to admit to not particularly liking the set design (Phil Eddolls) at first, but the more I watched the more I enjoyed the use of slide, trampolines, and mossy hillocks. It was children's storybook-like and therefore rather apt. Costumes were by Michele Clapton and were quasi-Medieval of no particular country, but I did think there was too little difference between royalty and peasant. Whoever's idea was the sheep, then this was inspired, and worked brilliantly. I LOVED the sheep!

BalletLORENT is a touring dance company, and, as their website states, excels in "storytelling through dance-theatre". That is exactly what this production was. A family-friendly, folk story which excellently told the story (new scenario written expecially by Carol Ann Duffy and narrated by Ben Crompton) in a clear and accessible way which didn't interefere with the visuals or the artistic integrity. In fact, using a narrator to speak key plot developments was inspired. All too often one can watch a ballet and admire the technique, love the mise-en-scene, but come away still not fully understanding the story.

This particular version of Rumpelstiltskin concerned a young King and Queen who loved each other very much. However, on the birth of their first son, the Queen dies and the King goes into abject mourning caring not one jot for his newborn son whom he nicknames Rumpelstiltskin. The young boy is kicked out of the castle and left to sleep rough in the fields whilst the King gloats over his wealth and mourns his loss. Years later, it is Rumpelstiltskin who helps the young shepherd's daughter in a task given to her by the King. The King is so delighted by the girl's gift (actually Rumpelstiltskin's but he doesn't know this) that he marries her, and she becomes his new Queen. In retuirn for helping her though, she had to promise Rumpelstiltskin that she give him her first born child. There are further plot twists, but not to spoil it, I'll leave it there, although I did find the ending / resolution of this story rather bizarre and confusing.

The dancing / performing was all lovely, although the vast majority of the presentation was movement combined with acro-skills, very little was actually ballet in the accepted sense. There was rustic dancing, trampolining, balancing, Cyr wheel and ribbons, and the company even used a chorus of community players both adult and children to fill the stage. The children were delightful, and I should give credit to the two youngsters who played the young Rumpelstilskin (Thomas Ryser-Welch) and the young shepherd's daughter,(Amelia Bell). There was also a couple of apprentice dancers performing too. These were post-grad students from The London Contemporary Dance School, making this production truly one that crossed and covered all parts of the dancing community from amateur children to working professionals. The amazing thing being that not only did this work excellently, but if they hadn't have been so credited then one would have thought they were all paid professionals.

The music score was by Murray Gold. Some of the score had a slightly eastern European flavour, whilst others were distinctly Western European. Some very much grounded in traditional folk rhythms and others a little more adventurous in their compositional structure. Perhaps all of this was a deliberate attenpt not to try and make the tale specific to any one country or ethnicity. This worked well. However, for me, since the ballet was actually quite long, there was not enough variation in the dynamics of the music. It therefore didn't leave the choreographer (Liv Lorent) so much choice in her variation of dance either. This therefore was a little staid at times and I did feel that the show was grinding to a halt on more than one occasion, perhaps due to this. Perhaps also due to the fact that the story was too protracted. The same story could easily have been told in half the time, and been snappier and more dynamic. The long solo dances did little to engage me watching on a screen; perhaps this would have been completely different live I do not know.

The four principal dancers were Gavin Coward (Rumpelstiltskin), Natalie Trewinnard (The Shepherd's Daughter), John Kendall (The King), and Toby Fitzgibbons (The Shepherd). All four gave performances of which they should rightly be very proud. The emotional journey of these chaarcters  was shown quite clearly on the film - due to the close-ups - and it was obvious that these were not just ballet dancers but actors too, as they truly were invested in their characters. There was also a lovely on-stage chemistry between The Shepherd and his daughter which pervaded my computer screen too.

I haven't seen any works by BalletLORENT before (I don't think) so this was a superb introduction for me to their company. I feel sure the ballet would have been much more thrilling seen live, but that notwithstanding it was still a highly enjoyable production and I both enjoy and applaud the ethics of this company utilising those in-training and community performers to give them a better understanding of how the industry works and an opportunity of being involved practically in a professional production.