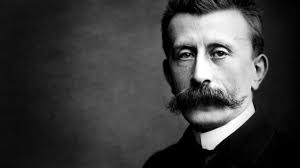 The music of german-born Polish Jew, Moritz Moszkowski (1854 - 1925) is still played and loved today. His solo piano works are much praised and even used as exam test pieces. His orchestral music is somewhat more obscure though, and here, thanks again to YouTube, I listened to a piece of orchestral music which was last played in a concert hall in 1875. And, as far as I am aware, there is no studio recording made of the work either. This aural 'miracle' has been made possible by a piece of computer software called 'Noteperformer' and somehow - no idea how personally - the software is able to "play" the score with authentic sounding notes from each instrument. It is a miracle of the modern world, and although the music on first listening does sound a little passionless, and devoid of interpretive dynamics, this is why. it is however a small miracle that we are able to hear the music at all! This 'Noteperformer' version is what YouTube had to offer, and so I listened!

It is a lyrical and melodic work, full of lovely tunes and harmonies. The work is in four movements in adherence to the Classical style. The music is sometimes a little playful and witty, and at other times can come across as moody and brooding; whilst mostly the symphony's 4 movements employ the device of a simple phrase repeated several times and then variations of that motif found. It was a most pleasant listen and am extremely grateful to both YouTube and the uploader for the chance of listening to this work.

Perhaps though, the reason this piece has been left on the shelf is that there is little in here that is original. It is a continuous series of themes which come straight out of the late Classical / Early Romantic textbooks, and the whole smacks of Chopin, Verdi, Brahms, Franck, and even Grieg.. all of whom seem to have done better jobs.  Perhaps that is why we laud his solo piano music, and tend to neglect his lesser accomplished orchestral works.