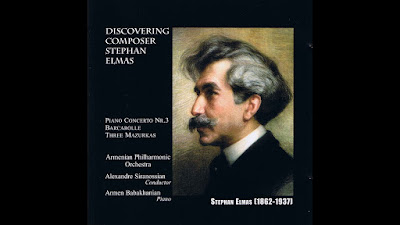 Today's listening pleasure has been one of completely new disoveries for me. First I listened to some traditional Chinese country music from the 17th century played on original instruments, then to the soundtrack of the hit Musical 'Hamilton' and now have broadened my musical horizons further still with this Romantic gem: Stephan Elmas's 3rd Piano Concerto, composed in 1900.

I knew nothing of Elmas, and so I needed to do a little research. I find that he was born in what is now Izmir in Armenia in 1862, dying in 1937. He is now only the second Armenian composer I have any knowledge of, and the other, Aram Khachaturian, happens to be one of my favourites. Elmas was a child prodigy and is best known perhaps today (for those who have heard of him) for his solo piano music and his 1st piano concerto (which I have yet to listen to).

In this recording of his third and final piano concerto, I heard The Armenian Philharmonic Orchestra conducted by Alexandre Siranossian. The solo piano being played by Armen Babakhanian.

This piano concerto is everything that a Late Romantic concerto should be. The first movement is heavily orchestrated, grandiose, and full of bright melody, whilst the subtle second movement starts slowly and simply with piano and light accompaniment in a song-like melody. Flowing, gracious, melodic and soothing. This melody is developed taking interesting paths through the whole movement before returning to the original once again with the sparse orchestration. Quite beautiful. Simply one of the best solo melodies of any piano concerto since Beethoven! The third and final movement, an ebullient allegro, starts with a beautiful passage pitching the piano with again a very lightly orchestrated ensemble, and winds its way through different melodies, mostly in the minor key, but keeping the mood very light and airy throughout. Here the piano is used much more as a solo instrument and the orchestra very much as accompaniment, more so than in the first movement. The movement eventually picks up a rather Victorian dramatic pace and once it does we feel the end is in sight... and this denouement pulls at our emotions but never once descends into melodrama. It is perfectly measured, with a bright, brash and exuberant final few notes.

Babakhanian's playing is light and sensitive, feeling each nuance of phrase as he negotiates some terribly difficult passsages, making them sound easy and lyrical. His balance with and understanding of the orchestra shines through, as he never once becomes lost as just an orchestral part, as happens many times with other compositions / pianists, and yet never becomes too loud or showing off. - difficult to tell on a recording I know - but that's the impression one gets. I love his touch and his connection with this piece. A virtusos pianist in his own right.