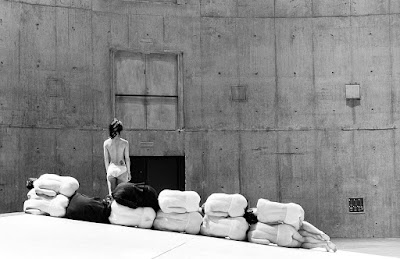 The world premiere performance of Sasha Waltz's 'Körper' ('Body') was at Berlin's renowned Schaubühne in January 2000. This performance was filmed by German TV company ZDF and broadcast on the 3SAT channel. The work marks the start of Waltz's blossoming career as an avant-garde choreographer dealing in biomechanics.

Performed on a bare stage with a semi-circular high concrete wall around gave the whole a feeling of imprisonment, confinement, and the starkness of the design combined with metallic and non-musical sounds which punctuated the piece made the work quite dystopian and frightening. This feeling was further developed by a central black plinth - the kind that reminded me of those in '2001 A Space Odyssey'; standing ominous but proud, jarring with the rest. The moment it came crashing down was clever and well-judged. Another layer to this deliberately uncomfortable feeling was by filming some sections of the piece in a very grainy black and white, reminiscent of the standard of film from home-made films in the 1960s, or perhaps a throwback to the era of silent films. Throw into this costuming of dark black suits, white or skin coloured underwear and naked bodies, and the whole was a mix between the kind of experimental dance theatre productions which were happening in both German and the UK around the early part of the 20th century. In Germany it was very much a style promoted as health and fitness, a movement in body awareness and how to stay healthy. The term given to it was FKK (Frei Körper Kultur), which was the beginnings of the UK's Naturist Movement. However, that was not all this piece represented, for the piece was far more sinister and far more intrusive, but it did seem to take this as its starting point.

The piece was almost one hour long and performed through without interval. There was no music to the piece as such, and indeed there were long periods of the piece where the only sounds made were those by the dancers' feet or bodies hitting the surfaces of the stage or each other. Sounds were introduced at certain points, but not musical sounds, mostly industrial sounds. Towards the end of the piece an accordeon played single long notes increasing in intensity, accompanied by a rhythmic drum beat. Again, the idea behind all of this was seemingly a kind of Orwellian torture for not only the dancers but for the onlooker to experience too. This was not an 'easy' watch. There were points in the piece where I really wanted to look away or turn it off. Such as the moments quite early on when folds of flesh were grabbed and performers were moved, lifted, passed from one to another by just holding on to the folds of flesh. There was a point to all of this though.. don't think it was all gratuitous or sadistic. The work was called 'Body' for a reason. Waltz examines every part of the body in detail, and asks questions about it. What is our body worth? What is beauty? and what price can one put on beauty? It is almost as if Waltz has made her own conclusion to these and tells us "The body unifies us. We all have a body, that's the one thing we all share in common. Both the body is also unique. Each of us has a different body and there are no two bodies that are the same. This is what defines us."