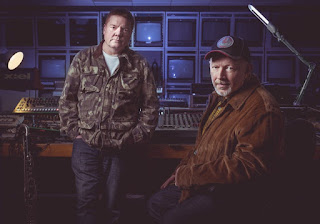 808 STATE will return for a LIVE hometown show at Manchester’s O2 Ritz this Winter, which is sure to be the best pre-Christmas party of the year.
Following their phenomenal appearance at Manchester Academy in December 2018 and a mesmeric live set at Bluedot Festival and at the Warehouse Project last year, the Acid House originals - turned pioneering electronic icons are planning another late night pre-Christmas affair to see out 2020 with a resonant bang.
Taking place on Friday 18th December 2020, Messrs Graham Massey and Andrew Barker, accompanied by live drummer Carl Sharrocks, will play a full headline 808 State set, with support performances from Manchester-based Ghanaian/Russian/German DJ & producer maverick Afrodeutsche plus DJ sets from Jackson Massey + Porchcrawler.

“So many plans unravelled during the past few weeks, and for good reason. But looking ahead, today we are pleased to announce this Hometown Xmas bash, which will be a family affair with our very special guest Afrodeutsche. Hoping we can gather safely in the winter and emerge with a fresh perspective into 2021” – 808 State

The show follows a surge in activity for 808 State since their last Manchester appearance; a period that most notably witnessed the release of their seventh album: ‘Transmission Suite’ in late 2019.
Recorded in the former nerve centre of the Granada broadcasting empire, ‘Transmission Suite’ became the band’s first new material since 2002’s ‘Outpost Transmission’ and arrived as a long overdue and enthusiastically welcomed addition to their catalogue. More stripped-back and conscious of space than the music that first made their name in the late ‘80s and early ‘90s, the new record draws a line between their home city and the original Detroit scene that birthed techno, and reflects on the pivotal roles they played in defining electronic music as we know it. Evoking the past, present and future, the album pays homage to the musical heritage of the genre 808 State continue to push the boundaries of, while confirming their own vital place within it.
Speaking about ‘Transmission Suite’ and the role Manchester especially has played in shaping the record, Graham Massey of 808 State says:
“We’re trying to make a future for other people to immerse themselves in, that’s always been a big part of 808 State: these kind of landscapes of futurism…. We’re at this moment now, when Manchester is starting to feel like Singapore or something… There are so many cranes. People come back and it’s like, ‘Wow - it’s all doubled’. Everything’s going vertical, and certain parts of history are being buried. It’s an interesting moment.”
Cementing their reputation as an essential act, both as scene forefathers and as torchbearers for boundless avant-garde electronica, the album was released to critical acclaim, with The Wire Magazine praising: “808 State’s music has lost none of its foreboding, finesse and power.”
Their upcoming gig at the Manchester O2 Ritz, promises to be an unmissable opportunity to hear the new material configured for the live stage and in the city of its creation for the very first time, alongside seminal cuts from their rich history.

Also available from:
www.O2ritzmanchester.co.uk
at April 28, 2020